Michelle Keegan was forced to do a live interview au naturel – besides the tattooed brows, lip fillers and fake lashes of course.

The former Corrie star got caught up in the tube strike drama and so arrived at the ITV studios with just minutes before her schedule slot on the sofa.

Michelle was joining Susanna Reid and Piers Morgan on Good Morning Britain to discuss her new show Tina and Bobby. Instead of being dolled up in hair and makeup beforehand, the 29-year-old had no choice but to give the interview fresh-faced.

She told the hosts that it had been a mad rush to get her onto the show.

“I nearly did miss it,” she said. “I came in through the door two minutes ago.

“I don’t have a scrap of makeup on. I just had the team putting powder and some lippy on.” 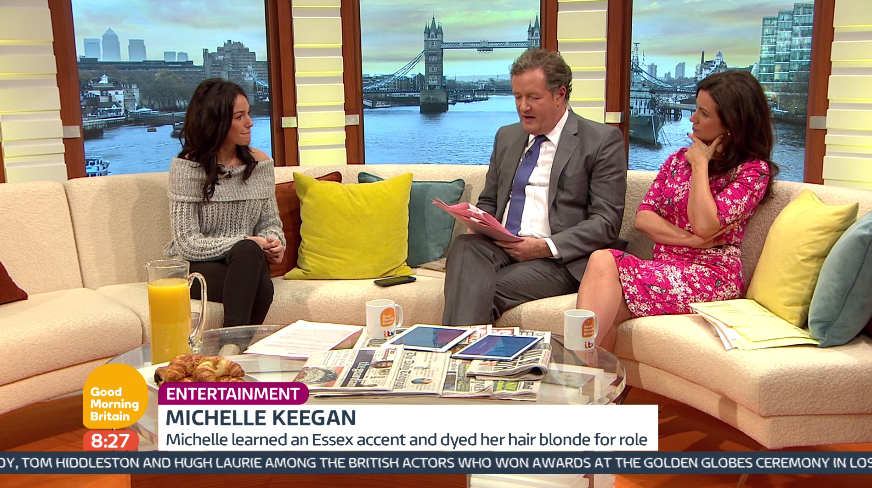 She added: “I can breathe now though. I’m going to have a cup of tea.”

With bed hair and hardly any slap on, confused fans took to social media to question her appearance.

One wrote: “WHAT has happened to Michelle Keegan?!”

Another viewer, who probably missed the reason for her natural appearance, took fire at Michelle’s beauty team by writing: “You should sack your makeup and hair stylist.”

However, others were full of praise the brunette beauty. One fan said: “Michelle still looks beautiful, she hasn’t even been to hair and makeup!! Wow!!!”.

Despite appearing on the show to discuss her new role, Piers couldn’t resist a cheeky question about the possibility of Michelle and hubbie Mark Wright having a baby.

He teased: “You said recently that you’re always broody, how are your broody levels right now?

“Can we expect them to migrate into something a little bit more substantial?”

Michelle replied: “They’re always up and down! At the minute they’re probably down.

“While I was filming for the role I obviously had to work with kids, and yeah, I loved it.

“[I’d love to have a little family] but not in the near future.”