Scarlett Lee, who came second on The X Factor 2018, has married Nathan Shaw.

The singing contest runner up tied the knot with her childhood sweetheart at Christ Church in Epsom Common, Surrey. 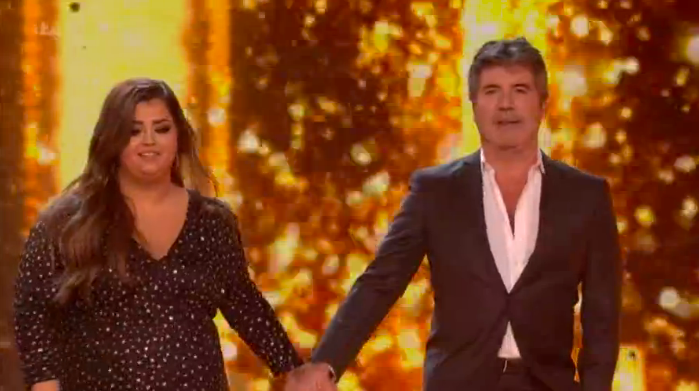 Scarlett was mentored by Simon Cowell on the singing show (Credit: ITV)

Read more: Britain's Got Talent star Amanda Holden will sing on the show

The 21-year-old said 'I do' in front of 350 guests at the daytime service including Love Island stars Nathan Massey and Cara De La Hoyde.

Also in attendance was four out of five members of United Vibe - Jon Guelas, Jack Tisdall, Blaise Duncan and Elliot Horne - as well as Misunderstood's Stephan Benson and Jeffrey Okyere.

X Factor star, Nicole Lawrence, who appeared on the show in 2009, sung at the nuptials.

There were 11 page boys and bridesmaids, who lined up outside the church.

Scarlett - who wore a stunning pink bridal gown with a beautiful long train - got engaged in January at a graveyard, next to the resting place of Scarlett's grandmother and grandfather.

Sharing the happy news at the time, she wrote: "There's no other place I would rather of done this, my granny and grandad are my whole world ... For what God Has Joined Together Let No One Separate!

He asked I Said YESSS! For what God Has Joined Together Let No One Separate! There’s no other place I would rather of done this, my granny and grandad are my whole world and I’ve been so sad they weren’t here to see me on the xfactor but he made this so special I’m so happy I love Nathan future MRS SHAW❤️❤️❤️

Scarlett had previously insisted her graveyard marriage proposal was "perfect" and she felt like her grandparents "were there" with her.

She said: "I didn't want it any other way. It was so perfect; we've been together since we were children. I know they [her grandparents] were there."