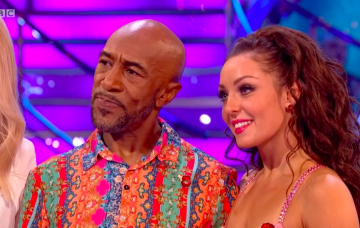 He allegedly ranted at the after-party

Many viewers were unhappy about Danny John-Jules getting the boot from this weekend’s Strictly Come Dancing – but no one was more unhappy than the actor himself, according to reports.

After leaving the BBC show on Sunday, the Red Dwarf actor allegedly threw a tantrum at the after-party, blaming bosses and his partner Amy Dowden for his exit.

A source told The Sun: “Danny lashed out at the judges, calling them imbeciles, and told friends and family he would have won the show.

“He blames her for speaking out to Strictly bosses and thinks he would’ve sailed to the final without the attention the story brought.”

The insider adds: “Danny is also saying he is refusing to do the Strictly tour because of the backlash and that, in his words, he’s ‘done with the show’.”

Danny and Amy were the seventh couple to leave the show, after a tense dance-off with Graeme Swann and his partner Oti Mabuse.

Danny and Amy performed their samba routine again, for which they scored 27 points on Saturday night. They hugged as they were announced to be leaving, and Amy shed tears.

He thanked her, saying: “Everything I’ve done in this show is because of Amy. She’s great… I love you.”

She told him: “Your children are going to be so proud of you, so well done.”

ED! has contacted Danny’s reps for comment, as well as the Strictly press office.

This follows a rough week of headlines for Danny, 58, and Amy, 27, who were forced to deny stories of rows on-set, with the actor allegedly shouting: “I am the star, not you!”

The professional dancer insisted she “never felt threatened”, after the disagreement in the dance studio last Wednesday.

Appearing on Strictly: It Takes Two on Friday, Danny joked that he would never “argue with a Welshwoman”.

Amy said: “Things did get a little bit intense the other day in rehearsal, but you know what, we took a half-hour break and then got straight to it.

Sadly that wasn’t to be.

Do you think Danny should’ve won? Leave us a comment on our Facebook page @EntertainmentDailyFix and let us know what you think.