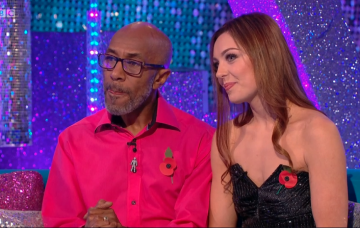 Speaking for the first time

When he appeared on last year’s Strictly Come Dancing, Danny John-Jules wowed viewers with his smooth hips and natural style.

But soon, the Red Dwarf and Death In Paradise star, 58, was beset by accusations that he “bullied” dance partner Amy Dowdon.

Now, Danny has spoken about the rumours for the first time.

During the series, Danny was rumoured to have had “backstage rants” and “Twitter meltdowns”.

He once apparently declined to take part in spin-off show It Takes Two, and the no-show followed an awkward few weeks of headlines about backstage tension and a reported argument with Amy during rehearsals.

He allegedly lashed out at co-stars and judges after he was eliminated from the show and then accused the BBC of bullying.

He also reportedly said he would never appear on the show again.

Now, on the eve of his one-man show I’ve Gotta Be Me, he spoke to The Sun about his Strictly experience for the first time.

Read more: Danny John-Jules’ wife slams Strictly for “throwing him under the bus”

Danny said he has “no regrets” over his appearance on the show.

“With me and Amy, it was always professional. I came in professional and I left professional,” he said. “As many times as I had Amy dripping off me and I was dripping off her, at no point did we ever have a conversation that wasn’t about dance.

“I didn’t have to broadcast what happened. I didn’t want to wash anybody’s dirty laundry in public. I did everything truthfully and honestly and I wouldn’t do anything differently. I have no regrets.”

After last year’s controversy, preparations are already underway for this year’s dancing spectacle.

Catherine Tyldesley is the latest star to be linked.

The former Coronation Street actress is reportedly in advance talks with producers about appearing on the upcoming season of the celebrity dancing contest and has even had a pairing test with one of the show’s professionals.