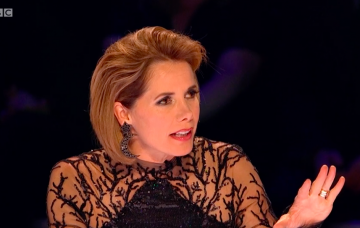 She was booed last night

Proving there are a lot of angry grammar fans out there, Strictly Come Dancing was bombarded with tweets from unhappy viewers last night.

It was thanks to judge Darcey Bussell, who was booed when she criticised Charles Venn’s Jive. But it was hard to know whether people were unhappy with her comments – or her use of “Pacific” when she meant “specific”.

The 49-year-old started by telling the Casualty actor and his partner Karen Clifton: “Wow, Charles, you’re really scary, babe, look at that hair!”

She continued: “You started so well, the attack, the intent, the full energy. It was fast, it was a frantic Jive. Really impressed with that.

“There were moments where you really had timing issues. I saw two Pacific [mistakes], very Pacific, sadly, sadly.” She trailed off as boos drowned her out.

Darcey meant, of course, “specific”, and it’s a common – and annoying – error.

Fans were somewhere between amused and exasperated by the blunder.

One wrote: “Did Darcey really just say ‘pacific’ instead of ‘specific’? Twice? #scd”.

I thought she did but I wasn’t sure. So I had to rewind and check.
Darcey definitely said pacific instead of specific. Twice.#Strictly pic.twitter.com/DCwmYWCHZE

Another added: “I thought she did but I wasn’t sure. So I had to rewind and check. Darcey definitely said pacific instead of specific. Twice. #Strictly”.

A third furiously tweeted: “It’s ‘SPECIFIC’ not ‘PACIFIC’, Darcey”, while a fourth said: “The scariest thing about #Strictly Halloween Week is that even Dame Darcey Bussell says the dreaded “pacific” instead of “specific”, nooooooo!!! 😱”.

One hilarious teacher commented: “For any students currently watching Strictly, Darcey Bussell spotted ‘specific’ timing errors in Charles’ dance, not as she said ‘Pacific’ errors. 🤦🏻‍♀️ Specific is an adjective that means ‘clearly defined or identified’, the Pacific on the other hand is an Ocean!”

However, some people struggle to differentiate because they have phonological dyslexia, so perhaps we should all desist from being so judgemental…

The rest of the judges gave Charles and Karen mixed praise, with Shirley Ballas calling them “entertaining”, adding, “Loved the routine, loved the choreography”.

Bruno Toniolli said they had “irresistible wacky energy,” as he leapt up and grabbed a shrieking Shirley.

Craig Revel Horwood mostly seemed to focus his comments on his co-judge, commenting: “I feel so sorry for Shirley sitting next to Bruno.”

Bruno suggested he have another week off and Bruno replied: “That wouldn’t be a bad idea…”

We can’t stop watching the clip of Darcey’s mistake, it’s so compellingly cringe-y. Let this be a lesson to you all…

What did you make of Darcey’s error? Leave us a comment on our Facebook page @EntertainmentDailyFix and let us know what you think.