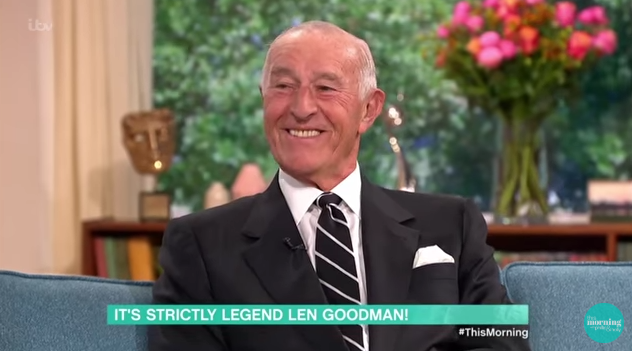 Strictly: Len Goodman reveals what he hated most about show and gives verdict on Motsi Mabuse

Len Goodman has opened up about what he hated most about his time on Strictly Come Dancing.

The former Strictly judge, who was replaced by Shirley Ballas when he stepped down in 2015, appeared on This Morning today after the new series kicked off over the weekend.

Commenting on the launch episode, Len revealed it was his least favourite part of the hit BBC show.

He told Holly Willoughby and Phillip Schofield: “I hated that week that we just had, when they join up, because three or four of them will go up to Claudia, and then Tess will come to you and say, ‘Oh, what do you think of those combinations?’

“I wanted to say, how do I know? They’ve not danced or anything yet! But, you know, you have to say, ‘Well they look as though they’ve got good chemistry’ or whatever.”

Len was also quizzed about new judge Motsi Mabuse, who has replaced Darcey Bussell, and what he thought of her first shows.

“I dunno, she seems alright doesn’t she,” he responded.

He also commented on Motsi and sister Oti working on the same show together.

“I don’t know whether they’d do something when that occurs. I can imagine it’s awkward if you’ve got to judge a relative. You’re damned if you do and damned if you don’t.

“If you’re overly nice it’s ‘of course, she’s your sister’ and if you’re overly nasty it’s ‘she’s got to do that because she’s her sister’. It’s difficult to give a true critique, but I’m sure she’ll be able to do it.”

Motsi herself previously insisted she will judge Oti fairly, saying she will be just as harsh with her sister as she will be with the other dancers and their celebrity partners.

According to reports, Motsi’s position on the panel ruffled feathers among the pro dancers, who are said to have feared it would lead to biased scoring.

But silencing any concerns, she said: “One of the main points everywhere in my life is fairness.”

Motsi, 38, added to The Sun: “Coming from South Africa and being treated unfairly all your life because of your skin colour, that’s been a huge point.”

The new judge went on: “I really need to be fair and she’ll get what everybody else is getting.