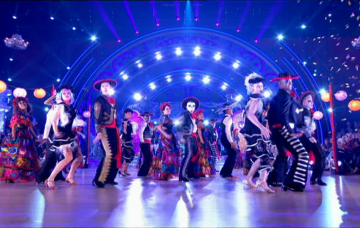 The opening routine offended some

Strictly Come Dancing’s Halloween week is always a spectacle, but some viewers interpreted the opening number as racist.

The pro and celeb dancers ensemble performed a number themed upon Mexico’s Day of the Day.

And while it was an explosion of drama and colour, certain fans of the show felt it was “misappropriating Mexican culture”.

Mexico’s Day of the Dead, Día de Muertos, is celebrated each year on November 2nd.

The public holiday sees family and friends gather to pray for and remember friends and family members who have died, to support their spiritual journey.

The routine was to the music of Harry Belafonte’s Jump In Line, from the legendary film Beetlejuice.

And it stirred up some negative vibes on Twitter.

“Are #strictly really going to pretend like that isn’t the most disrespectful opening to a Halloween show they could have come up with? FFS, leave Mexican tradition ALONE…” typed on angry spectator.

Another posted: “Surely #Strictly misappropriating Mexican culture is EXACTLY the same as what the black and white minstrels used to do in the ’60s ~”

A fourth wrote: “Family member – ‘What does Mexico have to do with Halloween…’ OH JUST GO WITH THE FLOW.”