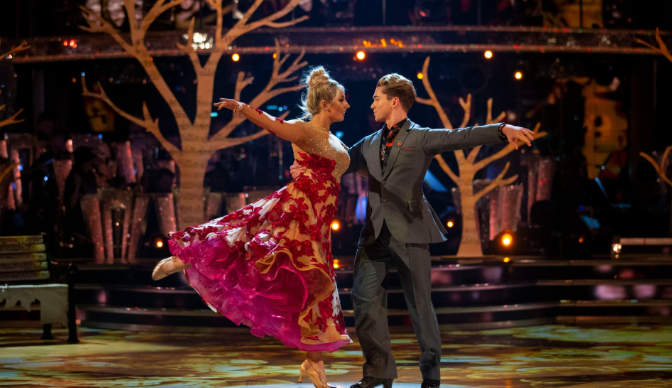 Has Craig written her off too soon?

Craig Revel Horwood should be eating his words after Saffron Barker topped the Strictly Come Dancing leaderboard on Saturday.

The 20-year-old social media star – who found herself in a dangerous position last week after she failed to impress the judges with her routine – came back with a bang this week when her and AJ Pritchard’s Waltz to Your Song scored an impressive 39 points.

Judges Motsi Mabuse, Shirley Ballas and Bruno Tonioli pulled out their 10 paddle, while Craig Revel Horwood dished out a nine.

Although her fate is in the hands of the public, Bruno is convinced she will make it through to the next round of the competition and ultimately dance at Blackpool Tower.

He said: “This will almost certainly get you a first-class ticket to Blackpool.”

Craig could end up with egg all over his face after he criticised Saffron in an interview earlier this week.

I’m just not sure she can get much better.

He told Radio Times: “I worry for her future. If she doesn’t push that extra edge, or put in that extra little bit of effort, then she will plateau – and that’s the worst thing.”

Read more: Viewers think that Mike Bushell’s time is up

He explained: “Sometimes she lacks attack and extension, and even though we’ve seen an improvement up until this point, I’m just not sure she can get much better.”

Michelle Visage and Giovanni Pernice – who performed a stunning American Smooth – followed closely behind with 36, while Emmerdale’s Kelvin Fletcher and Oti Mabuse bagged an reasonable 35 points for their Salsa to ‘Let’s Hear It For the Boys’.

Emma Barton and Anton Du Beke – who have struggled to climb to the top end of the leaderboard in recent weeks – proved they’re back in the running for the Glitterball Trophy this week when they scored 33 points.

Alex Scott and Neil Jones – who haven’t danced together for two consecutive weeks due to injury – opened the show with their energetic Jive to hubby Checker’s Let’s Twist Again and kicked off the high scores with their 31 points.

But Karim Zeroual and Amy Dowden nipped at their heels with their 30 points after their Viennese Waltz to Ed Sheeran’s Give Me Love raised the roof.

The bottom of the leaderboard was Chris Ramsey and Karen Hauer with 26 points and Mike Bushell and Katya Jones with 25 points.

Strictly Come Dancing: The Results Show will return to screens tomorrow (10.11.19) night where one couple will be eliminated from the competition.