Kelvin Fletcher left the judges on Strictly Come Dancing hot under the collar last night as he and Oti Mabuse performed a sizzling rumba.

Those now-infamous hips appeared to hypnotise the panel, with Craig Revel Horwood calling the routine filth.

Shirley Ballas said her temperature had been raised and she'd felt herself go red. 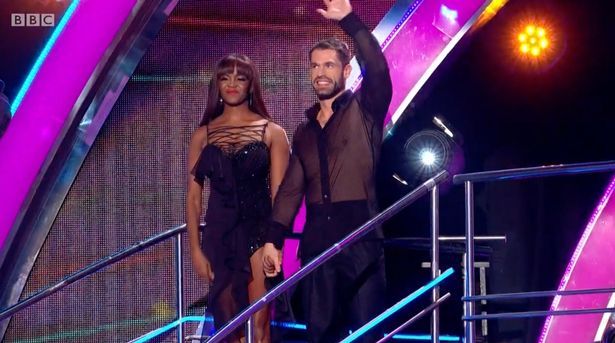 Oti and Kelvin got ready to rumba (Credit: BBC)

Have to say the leching and fawning the judges do over Kelvin Fletcher really isn’t ok?

The steamy performance - to Ain't No Sunshine, by Bill Withers - was rewarded with 36 points, nine from each of the judges.

It was clear from the comments on Twitter that some viewers at home were feeling similarly hot under the collar.

Some went as far as to suggest they had been aroused by it.

However, some viewers have described the judges' comments as fawning and leching, with one even suggesting it is 'sexual harassment'.

They feel it is double standards, as noone on TV would be speaking to a woman in those terms...

Panel and host leering over Kelvin Fletcher. Would it be acceptable to do that to a female contestant? #Strictly

If a panel of judges were letching over a female dancer the way the #Strictly judges are drooling over Kelvin, i'm sure the BBC would be deluged with complaints.

Now, I don’t normally watch #strictly. (Circumstances dictate that I am this week) But the way the judges are drooling and objectifying Kelvin is quite outrageous. If they were to do the same to a female contestant, all would be up in arms! Double standards. 👴🏻 pic.twitter.com/c8MObUYq9B

If a panel of judges were letching over a female dancer the way the #Strictly judges are drooling over Kelvin, i'm sure the BBC would be deluged with complaints.

Have to say the letching and fawning the judges do over Kelvin Fletcher really isn’t ok? Like he’s visibly uncomfortable and if it was a woman being spoken about in that way it would be called out for the sexual harassment that it is????? #Strictly

What do you think about this? Harmless fun or double standards? Leave us a comment on our Facebook page @EntertainmentDailyFix and let us know what you think.