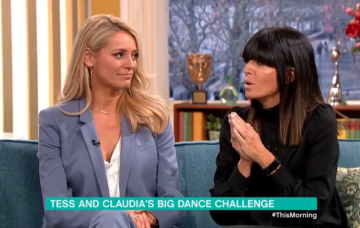 Presenter Claudia Winkleman has joked BBC bosses no longer trust her with the identities of who will be part of the Strictly line-up before names are announced publicly.

Appearing on This Morning alongside co-host Tess Daly, Claudia admitted she was seen as a “bit leaky” after previously revealing which celebs would be taking to the dance floor before they were confirmed.

“Now they tell me after they tell the press,” the 47-year-old said when asked if she could give details who might be involved for the next run of the hit BBC One series.

She also recalled – possibly in jest – how she once blabbed just moments after being told to keep the famous names lined up under her hat.

Claudia explained: “One year it was very secret. Lock the door, phones off, eyes down – here’s who’s doing it.

She continued, hilariously: “Got in the lift at the BBC, it went down and somebody went: ‘Oh yeah, you do the Strictly show, do you know who’s doing it?’

Apparently, producers have since had concerns Claudia could let secrets slip out in future.

“Afterwards they said: ‘She’s a bit leaky’,” she added with a comic flourish.

Claudia and Tess – who said their dream Strictly celebs would include Liz Hurley, Michael Caine, Alan Carr and Neil Kinnock – will be displaying their own moves for Red Nose Day when they attempt to boogy their way non-stop through a 24-hour dance marathon.

“I know it’s going to be hilarious to watch because we’re pretty bad dancers – I’m not very good at standing, let alone dancing!” Claudia said on Radio 2 this morning.

“Thankfully we’ll have each other and we’re going to push through to raise as much money as we can for Red Nose Day.”

Tess added: “I am so proud to be supporting Red Nose Day with Claudia, however I’m not sure what either of us were thinking when we agreed to the longest ever Danceathon challenge!

“We were worn out during our first choreography session so it’s no doubt going to be a tough challenge.

“But we’re doing this to raise money for Red Nose Day so it will be incredibly special and we’ll be thinking of all the people that will benefit from all the amazing projects funded by Comic Relief.”

Next month @claudiawinkle and @tessdaly will be flossing, dabbing and salsa-ing to the beat for the longest ever Danceathon in @comicrelief history!

For over 24 hours they’ll be dancing to the very best floorfillers, from the 60s to the present day. 💃 pic.twitter.com/C5EgnJwhfo

– This Morning airs weekdays on ITV from 10.30am