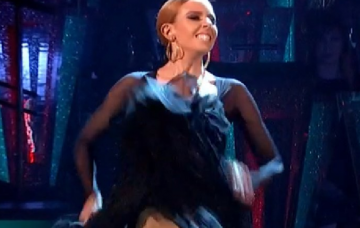 Some of her moves left viewers a little red faced

Stacey Dooley has joked about the wardrobe mishap that caused something of a Twitter storm after Strictly Come Dancing’s otherwise “perfect” finale.

The TV presenter and filmmaker, 31, was awarded the glitterball trophy on Saturday after performing a Paso Doble with pro partner Kevin Clifton.

The dance didn’t go completely to plan, with judge Craig Revel Horwood awarding the duo a lower score than any of the others. But the performance was perhaps most memorable for the unfortunate moment when Stacey whipped her dress above her hips.

She flashed skin-tone undies to the millions who tuned in to watch, but the knickers were barely visible and some wondered if they had seen a little more.

One Twitter user wrote “Why was Stacey flashing her Dooley?!?!?” while others asked “Did Stacey forget to put her knickers on?” and “Did Stacey just flash the nation or does she have the most suited skintone undies I’ve ever seen?”

Did Stacey just flash the nation or does she have the most suited skintone undies I've ever seen? #Strictly

Some of the more eagle-eyed fans of the show were not convinced, with one tweeting, “Calm down twitter. Stacey Dooley was wearing knickers”.

Stacey turned to Twitter after the show to address the apparent wardrobe malfunction, telling her followers: “I’ve won Strictly and flashed my knickers. A perfect Sat night”, accompanying the words with a fist-bump emoji.

Kevin was visibly emotional in his acceptance speech, as Saturday’s final marked the first time the pro has ever lifted the glitterball – despite having competed in five finals.

During her own acceptance speech, Stacey thanked Kevin when she said: “It’s no coincidence that he’s been in the final as many times as he has. You’re patient, you’re talented and your choreography is second to none.

“I’ve had the most incredible time and you know what? It’s daunting doing something that you haven’t done before. You feel silly, you feel like a bit of an idiot, but Kevin walks you through.”

Stacey was a favourite with the bookies but her win was still something of a surprise to the judges, given that she finished in fourth place on the leaderboard behind fellow contestants Joe Sugg, Ashley Roberts and Faye Tozer.

Were you backing Stacey to win on Saturday? Leave us a comment on our Facebook page @EntertainmentDailyFix and let us know what you think.