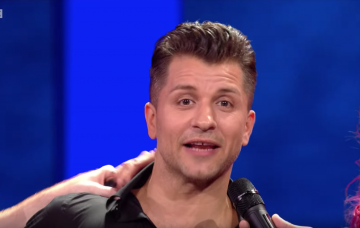 He announced he's leaving the show this week

The dancer even managed to get a particularly special send-off from Greatest Dancer judge, Cheryl – who appeared to squeeze his bum during his farewell.

Pasha and the rest of the Strictly dancers joined Cheryl and her fellow dance captains on stage for the opening number, showing just what it means to be a great dancer.

And for Pasha, it was his last Strictly hurrah, as he won’t be dancing with them again – at least not on TV.

After the number was over, host Jordan Banjo addressed the fact that it was a particularly special moment for Pasha, asking him to comment.

“As you might know, 2018 was my last series of Strictly, but I’m so, so excited to be here and share this beautiful stage with all my Strictly family for one more time,” Pasha responded.

As the crowd and the rest of the Strictly professionals cheered him, Cheryl seemed to show her appreciation in a different way.

Fans spotted her appearing to squeeze the dancer’s bum!

Pahsa’s fans took to Twitter to express their sadness at bidding farewell to the dancer after the show, confirming that he would be missed.

Oh @PashaKovalev we will miss you so so much on #strictly 🙁 And yes…. I bloody cried!!! So glad we get to see you one last time on the Professionals tour in May!!!! #TheGreatestDancer 😥😥😥😥 pic.twitter.com/zJ696VDF9b

WHAT DO YOU MEAN @PashaKovalev ISNT GONNA BE ON STRICTLY THIS YEAR ONWARDS?????? THERE ARE NO WORDS FOR HOW UPSETTING THIS IS FOR ME AND VAL pic.twitter.com/ZshBPWT4Ic

Pasha, you will be missed, SCD won’t be the same without you 😔 👏 #acedancer

Pasha announced that he was leaving the dance show on Wednesday, with a statement posted to his twitter page.

“After scoring 93 perfect tens, reaching four finals and lifting one glitter ball, it’s time for me to find a new challenge and so I’ve decided to make last year my final season on Strictly,” he said.

“I’ve had eight fantastic years, full of wonderful memories, thanks to the incredible partners, professionals and myriad of behind the scenes teams who all work to make Strictly the amazing production that it is.

“The biggest thanks go to all the members of the public who’ve supported me so much over these years – I look forward to seeing you on the Strictly Pro-Tour this spring, and for many future adventures to come!”

Are you sad to see Pasha go? Leave us a comment on our Facebook page @EntertainmentDailyFix and let us know what you think of this story.