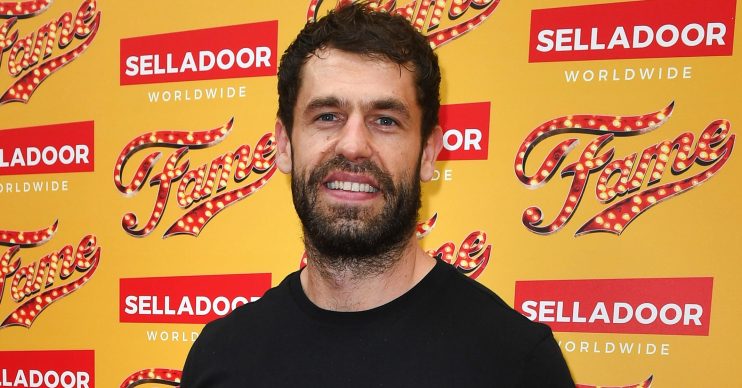 He's clearly not worried about the Strictly 'curse'

Every year when Strictly Come Dancing starts, there’s speculation about whether the show’s so-called ‘curse’ will strike.

Over the years, a number of married celebrities have ended up pairing off with their dance partner, leading some people to think that there’s some kind of jinx attached to the BBC show.

But Kelvin Fletcher, who’s taking part in this year’s series, says he WANTS people to think that he’s in love with his dance buddy, Oti Mabuse.

And the former Emmerdale actor, 35, even includes his WIFE in that!

Kelvin and Oti, 29, wowed the Strictly audience during the launch show with their steamy samba – a performance that prompted three of the four judges to rise to their feet.

And if anyone was of the impression that there’s more to the two dancers’ partnership than meets the eye, then Kelvin insists that they’ve done their job properly.

And he added that his wife of four years, Liz Marsland, would share his view.

He continued: “If there’s not that feeling there, my wife will be the first person to pull me up on it, because she absolutely wants to believe it too.”

Kelvin then pointed out that she’s seen him kiss numerous actresses while appearing on Emmerdale!

Kelvin was clearly pretty pleased with his and Oti’s first dance – after the show, he shared a video on Instagram of the pair celebrating backstage.

He captioned it: “Two weeks of long hours rehearsing, mistake after mistake, laugh after laugh and we left it all out there on the dance floor! Samba Queen!”

Speaking of the Strictly ‘curse’, earlier this week AJ Pritchard quelled suggestions that there’s anything romantic going on between him and his dance partner, YouTuber Saffron Barker.

AJ is dating fellow dancer Abbie Quinnen, and said that his girlfriend is cool about his partnership with Saffron, 19.

Appearing on Good Morning Britain, he said: “My girlfriend Abbie, she’s a dancer as well.

“She goes away and does her dancing. She understands the long hours and hard work.

“We always want the dance on Saturday to be the best dance possible. She’s not worried at all.”