Kelvin Fletcher has celebrated his birthday in the best way possible - strutting his stuff on the Strictly Come Dancing Live Tour!

Former Emmerdale star and Strictly 2019 winner Kelvin turned 36 on Friday, before taking to the stage at Symphony Hall in Birmingham.

And Kelvin was surprised by a special guest...his wife, Eliza Marsland, who then stayed to watch her hubby perform that night.

And as a special birthday treat, Kelvin even won that night's vote!

Read more: The future of the Bake Off line-up confirmed after Sandi Toksvig's exit

Writing on his Instagram Stories, Kelvin told his followers:  "Look who's come to surprise me!"

Sharing a picture of them both on Instagram before the curtain went up, she wrote: "Opening night was AMAZING!!!

Look who's come to surprise me!

Backstage, Kelvin - who won Strictly alongside professional dancer Oti Mabuse - was also treated to a massive birthday cake by all the cast and crew. 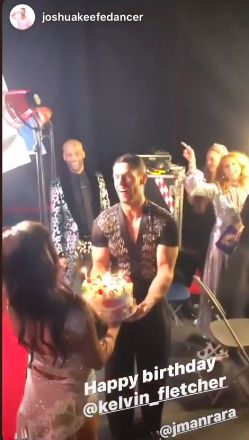 Kelvin was presented with a giant cake by Janette (Credit: Instagram/joshuakeefedancer)

A video shared to his Instagram stories, Kelvin can be seen blowing out the candles as everyone sang Happy Birthday to him.

The Strictly Come Dancing Live Tour is travelling the UK until next month, where it will wrap up at London's 02 Arena.

This year, former Strictly winner Stacey Dooley is hosting for the first time, while judges Shirley Ballas, Craig Revel Horwood and Bruno Tonioli will mark a selection of the 2019 celebrities and professionals each night.