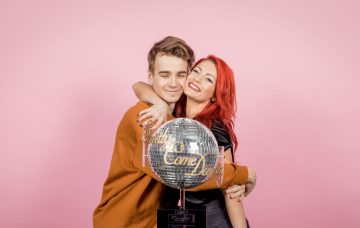 Joe Sugg has appeared to confirm he is dating his Strictly Come Dancing partner Dianne Buswell.

The pair were romantically linked during their time on the BBC One competition but would not say whether they were an item.

On Sunday, a day after the Strictly final, Joe posted a picture of the pair gazing into each other’s eyes on Instagram.

“I may not have won the glitter ball, but I’ve won something a million times more special,” he wrote.

The picture went down a storm with fans online.

“Oh my god crying!” said one excited person on Instagram, while another gushed: “My heart can’t handle this!”

“Saw the look of love many a time, could not hide it,” said another.

YouTuber Joe, 27, lost out to documentary maker Stacey Dooley on the dancefloor.

Meanwhile, Stacey has said she is still feeling “made up” a day after her Strictly Come Dancing victory.

The documentary maker and her professional partner Kevin Clifton won the coveted Glitterball trophy in Saturday’s final of the BBC competition.

Stacey was pictured looking relaxed and happy in London the morning after her win.

On Sunday she also posted a string of messages on social media telling of her delight at triumphing on the dancefloor.

One shows her and Kevin holding their trophy above their heads.

“A sincere thank you to every single person who has voted and been so lovely,” said the star.

Sure. 😂🤯❤️ A sincere thank you to every single person who has voted and been so lovely. So made up. King Kev. You’re a champ….(officially now)

What do you think about this new Strictly romance? Leave us a comment on our Facebook page @EntertainmentDailyFix and let us know!