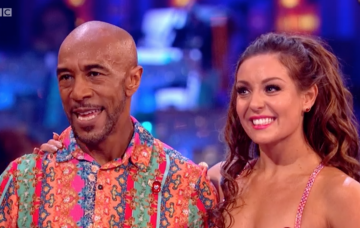 The judges chose to save Graeme Swann

Danny John-Jules and his pro partner Amy Dowden have been voted off Strictly Come Dancing.

They became the seventh pair to lose their place in the competition, after facing Graeme Swann and his partner Oti Mabuse in the dance-off.

Danny and Amy performed their samba routine again, for which they scored 27 points on Saturday night.

Craig Revel Horwood voted to save Danny, while the others saved Graeme.

It comes at the end of a testing week for the pair, who have been the subject of controversial headlines.

Actor Danny, 58, and Amy, 27, have both spoken out after reports of a row between them.

The Sun claimed that Amy had told bosses she didn’t wish to continue with Strictly after Red Dwarf star Danny reduced her to tears.

Read more: Danny John-Jules hits out at the BBC

“I am the star, not you!” he allegedly shouted during rehearsals.

The dancing duo later played down the row on It Takes Two with Amy asserting she never felt threatened or bullied by her partner.

Danny’s exit has stirred up a mixed bag of emotions on social media, with some viewers claiming he lost his place because of the negative press and the judges’ bias, while others felt it was his time.

Farce. Dad dancer against someone who really can dance. Newspaper manipulation. Next week who'll they pick on?Maybe YouTube guy gets caught up in satanic, dog buggery frenzy. #Strictly #ShameOnThem

What a stitch up that was the judges should be ashamed playing along with that charade. #Strictly

Am done with #strictly! @CraigRevHorwood is the only genuine judge. That horrific gym session was a joke! Grrrr! #stitchup #lovecraigthough

#Strictly Unfortunately Danny made a number of mistakes in the dance off so deserved to be voted off tonight.

I think that was the right result #Strictly

Did the right couple go tonight? Leave us a comment on our Facebook page @EntertainmentDailyFix and let us know what you think of this story.