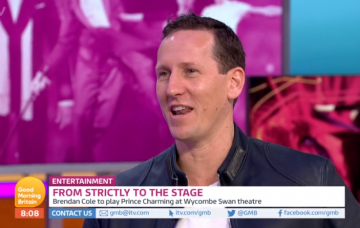 Former Strictly Come Dancing star Brendan Cole has criticised the judges for dishing out too many high scores this series as he hinted Stacey Dooley’s win ‘made a mockery’ of the show.

During an appearance on Good Morning Britain on Tuesday, the professional dancer – who was axed from Strictly earlier this year – claimed there have been too many changes to the show and even suggested that the judges don’t know what they’re doing.

The 42-year-old said: “The show has changed so much even from my time on it, even in the last year. We’ve seen a push to get a younger audience this year.”

GMB host Charlotte Hawkins, who previously starred on the show with Brendan, then added: “The judges don’t always know what they are talking about.”

Brendan replied: “Well Craig [Revel Horwood] is usually bang on the money but I’m not sure about the rest of them.

“I was really disappointed with how many tens were thrown about across the board from various judges. Ten means it’s perfect and I’m sorry but I haven’t seen a perfect dance on Strictly in my 15 years.

“You get as close to a ten, especially in a final, but when they start giving them out on week three and week four you think, ‘we’ve got nowhere to go.'”

Host Piers Morgan questioned how Stacey Dooley had won despite not getting the top scores on the show.

Brendan replied: “It’s a popularity contest and that’s how the show wants it.

It comes after pro dancer Kevin Clifton, who won this series with Stacey, said he confronted Craig Revel Horwood about his low marking at the wrap party.

Craig, 53, failed to give the dance couple tens during the final at the weekend.

He said: “How boring would the show be if everyone was of a certain standard?”

What do you think of Brendan’s comments? Leave us a comment on our Facebook page @EntertainmentDailyFix and let us know!