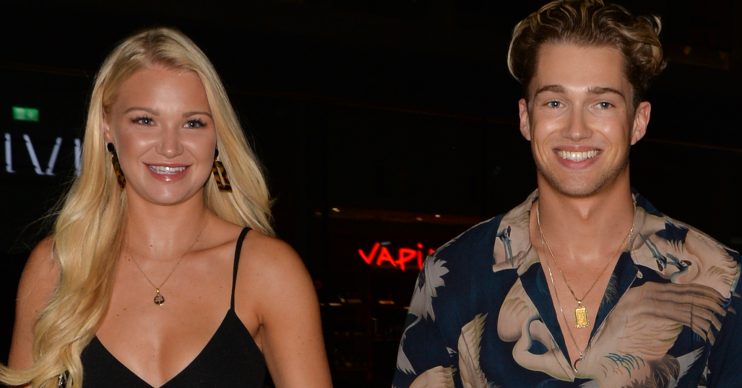 Fans have claimed Saffron Barker will 'get her claws in'

AJ Pritchard’s girlfriend Abbie Quinnen has found herself coming under attack by nasty trolls who claim she will fall foul of the so-called ‘Strictly Come Dancing curse’.

Abbie, a dancer herself, first went public with Strictly professional AJ in July and the pair insist they are really happy together.

But after posting a proud message on AJ’s Instagram, Abbie received some mean-spirited comments from vicious followers, suggesting he will ditch her for his celebrity partner Saffron Barker.

Having written: “That’s my boyfriend!” alongside a steamy picture of AJ, one person warned Abbie: “..until saffron gets her claws in.”

Another added: “You wait til you see he’s got with Saffron instead of Abbie. Just saying.”

The comments came just hours after a national newspaper ran a series of pictures of AJ and Saffron looking close during rehearsals.

Fans have also already pointed out online just how much Saffron looks like Abbie.

But despite some pouring doubt on AJ and Abbie’s relationship longevity, they have a huge army of followers backing them.

One kind fan has since told Abbie: “Hope you don’t care about nasty comments online. All successful people have haters.”

Strictly Come Dancing continues tonight (Saturday September 28) and, for the first time this series, one couple will find themselves at risk from elimination.

AJ and Saffron received an impressive score of 27 in week one, meaning they finished in fifth place.

Sharing her nerves, Saffron today tweeted: “Today is the day!

“Thought I couldn’t be any more nervous than last week but here I am my stomach is in bits but I’ve never been so buzzing for anything!! @bbcstrictly 6:40pm!”