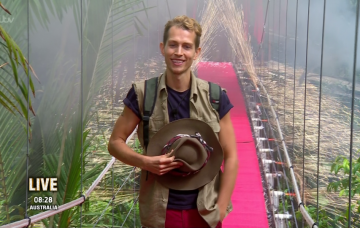 And then there were four

James McVey has been voted off I’m A Celebrity Get Me Out Of Here! after three weeks on the show.

The Vamps musician was selected to leave the camp after the public vote, with only four now remaining in the jungle.

James said he was glad to go out at this stage in the competition because he was finding the jungle tough following the departure of friend Nick Knowles, who he saw as a father figure.

He said: “I’m so happy, it’s been the toughest thing I’ve ever done.

“I saw Nick as a father figure in this process. When he went it was a massive blow.

“I’m glad I’m out now, because I missed that.

James had been critical of some campmates and their perceived acting up for the cameras, but bonded with Nick and Harry Redknapp.

He has been reunited with his girlfriend Kirstie, after enjoying a tearful surprise visit from her before his departure from the show.

James said he struggled with the jungle cuisine, saying: “I realised that it wasn’t an easy start.

“It was just that companionship that got me through.

“The jungle diet has served us all well. Your mental health gets stronger.

“But your body never really gets used to it.”

The musician was not the only one to cry at the sight of a loved on, with Harry reduced to tears by a visit from his wife of 54 years, Sandra.

Fleur East had a visit from her sister, John Barrowman from his husband, and Emily Atack from her mother.

The celebrities and their families shared a dance around the campfire during an emotional episode of the show, which left Holly Willoughby weeping as she presented it.

Did the right celeb go?