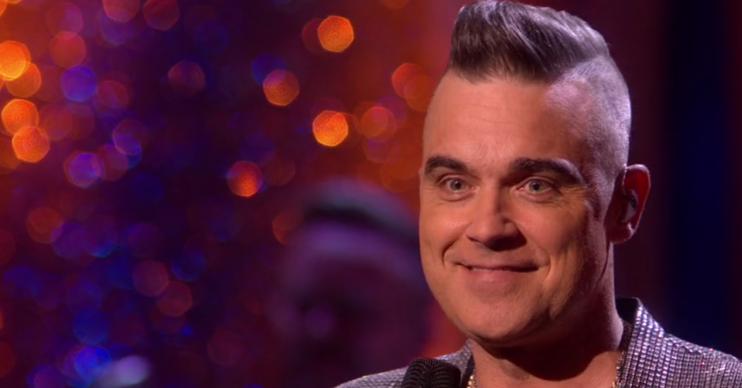 It might cost a few quid to get him on board, though

Robbie Williams could be heading to the Aussie jungle next year – and not because he intends to be touring down under.

The Angels singing star joked he might be keen on taking part in next year’s I’m A Celebrity during his ITV special last night.

I’m A Celeb hosts Ant and Dec made a cameo appearance for a skit via video link on his Not The Robbie Williams Christmas Show – and following some banter about how many viewers would be watching their respective shows, Robbie made his case to be among the 2020 campmates.

“What about the next series? Any guests lined up, yeah?” he said as he pointed out his ‘supper’.

Whipping away a cloche as he revealed a plate of fake mealworms and wallaby anus, Robbie pantomimed auditioning for the ITV reality series.

“Someone was telling me the bigger the star, the more you get paid,” Robbie added, with a wink and nudge.

How am I looking for the next series?

He chuckled: “So a really famous singer will get paid millions for going on I’m A Celebrity, right?”

Swallowing down the alleged Bush tucker treats, Robbie pretended to be repulsed by the offerings.

Read more: I’m A Celebrity viewers ask why reunions with loved ones was cut in final

“Those bugs are so disgusting… but I am going to eat them anyway to make great prime time television,” he said sarcastically.

As if on a wind up, Ant and Dec encouraged him to carry on chomping as Robbie plumped for a spot of anus.

Dec chimed in: “Fill your boots!”

A mock-hopeful Robbie then enquired: “How am I looking for the next series?”

The Geordie duo replied they were “impressed” and “amazed” before letting Robbie down gently.

Are you tuned in to @itv for 'Not The Robbie Williams Christmas Show'?

“We’re not the people who book the celebs,” Ant concluded as Robbie spat out the remnants of whatever it was he’d had in his gob.

“Enjoy your dinner!” Dec signed off.

“Thanks for nothing,” Robbie splutter as the last word on the matter.

Fans seemed to love the sketch, with many tweeting about it on social media.

“That ‘Not Live’ segment with Ant & Dec was just top telly!” said one Twitter user.

“Omg Ant and Dec were on Not The Robbie Williams Show!!!” added another excited fan.

Another person remarked: “Watching not the Robbie Williams Christmas show and @antanddec made a short appearance. In Oz and still get everywhere haha not that I’m complaining.”