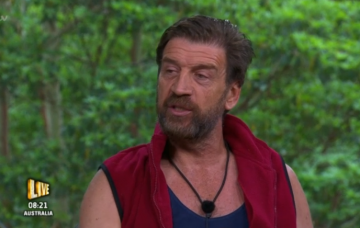 It came as a bit of a shock

Nick Knowles has become the latest celebrity voted out of the I’m A Celebrity jungle.

The DIY SOS presenter found himself in the bottom two alongside X Factor star Fleur East on Thursday night’s show.

However, after 20 days in the camp, Nick’s journey Down Under has come to an end.

After he said goodbye to his fellow campmates, Nick opened up to hosts Holly Willoughby and Dec Donnelly about his jungle experience.

He said: “When I came in here I wanted to see whether a whole group of people could get together and make friends.”

Nick said he would like to see either Fleur or Harry Redknapp win the series.

Viewers watching from home were gobsmacked by the result and shared their thoughts on Twitter.

Another said: “Omg I can’t believe Nick has gone. I really wanted him to get to the final.”

A third added: “Wow I’d thought he would be within last three… SHOCKED.”

Omg I can’t believe Nick has gone. I really wanted him to get to the final 😭😭 #ImACeleb

#ImACeleb Wow I’d thought he would be within last three… SHOCKED.

honestly thought nick wld be in the final 3 gutted :((( #ImACeleb

WHO VOTED NICK OUT AND KEPT EMILY AND JAMES IN? WHOOOOOOO #imaceleb

Whoever is voting for Fleur please leave🙄 fuming #imaceleb

How on earth has nick gone!? Absolutely fuming #imaceleb

Nick won over the nation during his time in the jungle.

His generous acts of giving up his food and his pillow – and his refusal to hang up the female celebs’ underwear in camp because he is “old fashioned” left many viewers falling in love with him.

However, some people called him “fake” and accused him of putting on a “Mr Nice Guy” act in order to win, others said they think he is being “genuine”.

Nick’s exit from the show comes after bookies William Hill placed the odds of Nick being voted out on Thursday night at 6/4.

William Hill’s Joe Crilly said: “Anne [Hegerty] was the best backed to go last night before the show started, however we saw a spike of bets for Nick as the show wore on and we think that premature gamble is preceding his departure tonight.”

Are you sad to see Nick go? Leave us a comment on our Facebook page @EntertainmentDailyFix and let us know what you think!