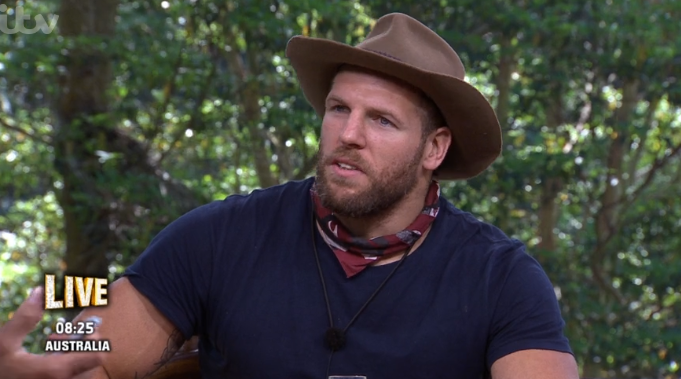 James Haskell has said eating small food portions in the I’m A Celebrity jungle left him struggling to move.

The rugby player, who left the jungle during Tuesday night’s episode, revealed he went from eating 4,000 calories a day to just a couple of hundred in camp.

James, 34, said at some points he was “unable to get off my bed and move” because he was “so hungry”.

Speaking to The Sun, James said: “I had physical ailments from where I went from 4,000 calories to 250 calories. That is starvation. That was the biggest shock.

“I had nothing in my legs. I’ve never had a panic attack before. It felt like I’d done leg weights or 100 hill sprints and I’d get up and go dizzy.

I had physical ailments from where I went from 4,000 calories to 250 calories.

“I’d have to hold on to the tree and hold myself up. I’d walk 25 steps and be heavy breathing.”

James said he felt “personally handicapped” because he was “starving”.

The star claimed that he lost almost two stone during his 18 days in the jungle.

James became the fourth celebrity to be voted out on Tuesday night.

On Wednesday, he shared a snap to Instagram showing himself tucking into a piece of pizza and a Corona.

Meanwhile, during an appearance on This Morning alongside his wife Chloe Madeley on Wednesday, James revealed he wasted no time when it came to indulging in some of his favourite foods.

Host Phillip Schofield asked what he had eaten in the hours since leaving the jungle and James revealed: “I came out and everybody had warned me, ‘don’t go too mad on the food.’

“I wasn’t full for one second in that experience so I went and smashed a full English breakfast, muffins, granola and then Chloe filled my hat with biscuits for the drive back so I ate that.

“Then I got back to the hotel and had two pizzas, a couple of Coronas, a cheese board and some banana bread and now I’m about to go and smash some dinner.”

Laughing, he added: “Do you know what? I’m still hungry.”