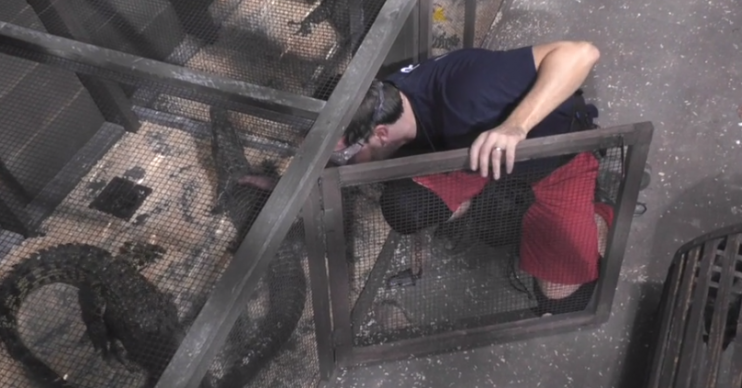 He is trying to win meals for camp

Andrew Maxwell comes face-to-face with a crocodile in tonight’s Bushtucker trial on I’m A Celebrity.

The comedian will face Arc of Agony tonight and ITV has released a preview clip of the trial ahead of Tuesday’s episode.

Andrew will have to enter a wooden boat which is filled with a number of critters including spiders, snakes and baby crocodiles.

In the clip, Andrew is seen searching for stars while talking in an Australian accent.

Putting his hands into boxes containing creatures, Andrew says: “G’day what are you? A couple of yabbies. Alrighty.”

Going to be real gentle with you boys.

Host Dec Donnelly asks him: “Not found the crabs Andrew?” to which Andrew replies: “I couldn’t find them. I can’t find the crabs so I’m just holding onto the key there for now.”

He then moves onto the next container, which has two baby crocs inside.

He says: “Crocodiles, crocodiles. G’day sporto. Going to be real gentle with you boys,” as Ant McPartlin and Dec burst into laughter.

Ant asks: “How many are in there?” to which Andrew says: “Two, two. Two big crocs. Two big boys.”

Referring to one of the crocs, Ant says: “Look at him, he doesn’t like you. Nice and gentle.”

Andrew says: “Nice and gentle…” as one of the crocs lashes out at him.

Earlier this week, Andrew ruffled a few feathers in the camp after clashing with James Haskell and Ian Wright.

Andrew first fell out with James as they disagreed on the Dingo Dollar challenge question.

James suggested they pick their answer by the campmates putting up their hands to which answer they thought it was.

Andrew said: “Not everyone put their hands up,” to which James snapped: “They did. You didn’t look! You’re looking at me.”

Walking away, Andrew said: “It’s just as shambolic as ever, we’re not getting chocolate.”

Pulling Andrew aside, James then apologised for “snapping” at him and they hugged it out.

Andrew later clashed with Ian as he accused the former footballer of “singling him out”.

Ian denied Andrew’s claims and the comedian later apologised to Ian and said he was just “knackered”.