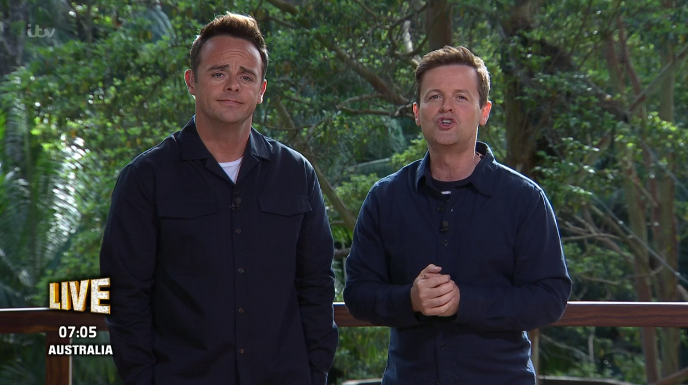 He caused a stir during Sunday night's show

Viewers of I’m A Celebrity think Andrew Maxwell will be the first celebrity voted out.

The comedian caused a stir during Sunday night’s show as he clashed with James Haskell and Ian Wright.

Andrew first fell out with James over the Dingo Dollar challenge question which was: “What percentage of adults do not trust politicians?”

The answers were either 59% or 79%, and Andrew believed it was the lower number.

James then asked for a show of hands who thought it was 79% and the majority agreed, so they chose that as their answer.

Andrew said: “Not everyone put their hands up,” to which James snapped: “They did. You didn’t look! You’re looking at me.”

Walking away, Andrew said: “It’s just as shambolic as ever, we’re not getting chocolate.”

Pulling Andrew aside, James then apologised for “snapping” at him and they hugged it out.

Andrew later clashed with Ian as he accused the former footballer of “singling him out”.

Ian denied Andrew’s claims and the comedian later apologised to Ian and said he was just “knackered”.

“Please can Andrew be the first to be voted off.

Viewers were divided over the clash with many going against Andrew.

Some have even predicted he will become the first star voted out of the jungle.

One person said: “What is wrong with Andrew. Please be voted out first! So awkward to watch!”

What is wrong with Andrew. Please be voted out first! So awkward to watch! #ImACelebrity

Another wrote: “Please can Andrew be the first to be voted off.”

A third tweeted: “This Andrew needs to be the first one voted off.”

Please can Andrew be the first to be voted off #ImACeleb

Andrew Maxwell is so annoying. Really hope he gets voted out first! #ImACeleb