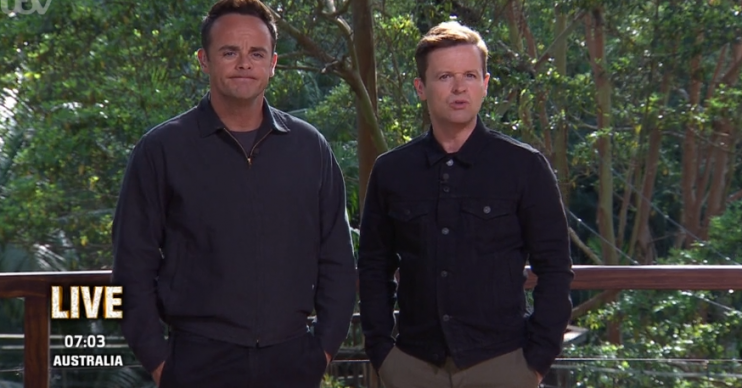 They say it could "come back to bite them"

Viewers have hit out at I’m A Celebrity hosts Ant McPartlin and Declan Donnelly, warning the pair that they are getting “too big for their boots” and it “may come back to bite them”.

The comments come after the double act mocked viewers who complained that part of the show’s Love Island-themed task was unfair.

During the task, which took place on Sunday night, viewers saw James Haskell and Roman Kemp attempt to unscrew stars from one box, before threading them back into a different box.

The only problem was, the boxes were filled with huge biting crabs that got in the way – something the viewers thought made the task “impossible”.

However, during Monday night’s show, the duo mocked viewers for their outrage.

The pair joked that James had “sausage fingers”, which meant he couldn’t complete the task, and tweeted that “the stands ins did it when we tested it”.

They also poked fun at viewers by pretending to forget the word impossible, before the Mission: Impossible theme music played – to much laughter from the crew.

“I love Ant and Dec but they aren’t their usual funny selves – so much sarcasm for me this year,” said one viewer.

Another added: “They don’t seem to be as entertaining as they used to be – just seem to have lost their way.”

Read more: Jacqueline Jossa is elated to discover she won’t face the next trial

A third said: “Too big for their boots lately. It may come back to bite them.”

“These two are up their own a**es and believe their own hype,” said another. “Used to love the banter, but now…”

“Getting a little too big and believing in their own hype. What happened to the nice boys with a great sense of humour?” asked another.

Others said they would have had more “respect” for the boys if they’d actually shown the task being completed, “rather than take the p**s”.

Others said the boys should complete the task themselves to show it can be done.

Getting a little too big and believing in their own hype. What happened to the nice boys with a great sense of humour?

“Ant and Dec should do the trial to show it can be done, just prove it,” said one viewer.

“I would love to see them do trials to see how they like it,” another commented.

A third added: “Let’s see you two do some trials and earn your money for once.”

Another said: “Bring back Holly Willoughby, that’s what I say.”

Holly filled in for Ant on last year’s show after his drink-drive arrest and subsequent stay in rehab.

Tell us what you think of the boys on our Facebook page @EntertainmentDailyFix.