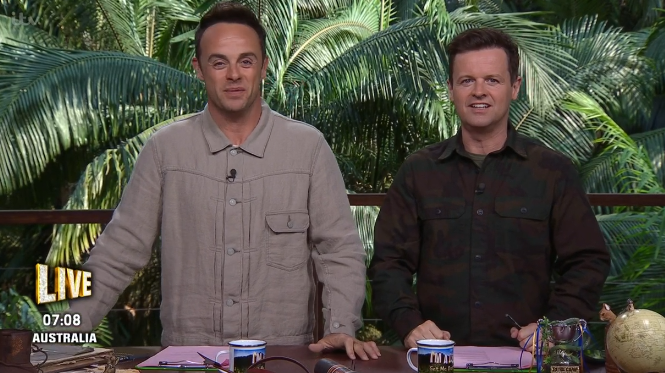 They joked that they couldn't see him!

Viewers of I’m A Celebrity are all making the same joke about Dec Donnelly‘s outfit tonight.

On Thursday’s show, the presenter was sporting a camouflage jacket as he hosted alongside Ant McPartlin.

But Dec’s look distracted viewers with many joking they ‘couldn’t see him’ because of his jacket.

Read more: I’m A Celebrity viewers want Jacqueline Jossa ‘to win’ as she reveals another skill

One person said: “Is Dec’s body not making an appearance tonight?”

Is Dec’s body not making an appearance tonight?

Another wrote: “Why is Dec just a floating head?”

A third added: “Has anyone seen Dec??? Can’t see him anywhere ! ant looks good in that shirt though.”

Is Dec’s body not making an appearance tonight? #ImACelebrity

Why is Dec just a floating head? #imacelebrity

has anyone seen dec??? can’t see him anywhere ! ant looks good in that shirt tho @antanddec #imaceleb

Dec @antanddec I think there’s something wrong with your shirt, I can’t see it #ImACeleb pic.twitter.com/pX44OmepKz

Meanwhile, during last night’s show, viewers expressed concern for Dec after they spotted he was sporting a second injury.

During Sunday night’s launch, the presenter had a burn on his arm and he explained to worried fans that his injury was caused when he burnt himself while sterilising daughter Isla’s dummies.

On last night’s episode, Dec was wearing a plaster on his finger and it got some fans talking.