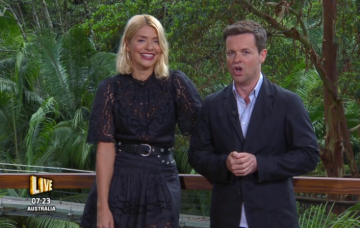 I’m A Celebrity pulls in highest ratings in five years

Holly Willoughby has proven to be a lucky charm for I’m A Celebrity … Get Me Out Of Here! with the show enjoying its most-watched launch since 2013.

It was the biggest overnight audience for any channel so far this year, excluding the World Cup, according to ITV.

It was also the fourth-largest audience for the launch of I’m A Celebrity in the show’s history.

This year’s opening episode saw the 10-strong crop of celebrities tackle skydiving, jungle creatures and a 100m (328ft) high challenge called The Edge – the highest the show has had so far, host Declan Donnelly told contestants.

The programme – which includes football boss Harry Redknapp, DIY SOS presenter Nick Knowles and ex-EastEnders star Rita Simons in the line-up – opened with Dec jokingly introducing Holly, who is standing in for his long-time co-host Ant McPartlin as he takes a continued break from his TV commitments.

The first four contestants seen in the show were entertainer and actor John Barrowman, Rita, The Vamps star James McVey and Coronation Street actress Sair Khan, who were met by the presenters on a yacht.

They were split into two teams –  John and Sair in the red team, and Rita and James in the yellow team – before being whisked off in a helicopter to face the first challenge of the series.

Rita and James won the task, collecting 10 flags in the fastest time, and they chose The Chase’s Anne Hegerty and former X Factor singer Fleur East to join their team.

Harry and Nick were left to join the red team.

A final challenge was won by the red team after they successfully picked up their jungle gear from a pontoon in the middle of a lake faster than their rivals.

They won the right to head to the more luxurious of two camps, Croc Creek, while the yellow team had to settle for the more basic Snake Rock, which has its beds on the jungle floor.

The trial will see her having to collect stars for her campmates from chambers and holes occupied by snakes.

I’m A Celebrity … Get Me Out Of Here! continues on ITV at 9pm.