Heartbroken fans flooded social media with their concern for Caitlyn Jenner when nobody appeared to greet her on the bridge as she was voted out of I'm A Celebrity last night.

"I was annoyed thinking ITV cut the bit where Caitlyn's fam met her at the bridge, then came on Twitter and saw that NO ONE had come for her?" tweeted one disappointed viewer.

"Didn't wait all that time just to have ITV not show us who met Caitlyn Jenner on the bridge, what a scam," fumed another accusatory social media user.

And another fretted: "Feel so sad for Caitlyn Jenner. She really needed someone to be there for her tonight."

But despite fans' worries - and disappointment at the lack of Kardashians - it seems Caitlyn, 70, was not on her tod for too long.

So sad, nobody met Caitlyn, all those children and not one of them bothered to turn up #saddos @Caitlyn_Jenner @IAmCait @ITV @imacelebrity https://t.co/ni0LHGUfZj

Mail Online claims James Haskell had a tearful reunion with his former campmate just moments after cameras cut away from the departing Caitlyn.

Apparently 'The Beast' was keen to ensure 'she had someone there' - and a few hours later Caitlyn was also joined by her close friend and business partner Sophia Hutchins.

I had a big surprise when I got to the hotel...

An insider is reported to have told the tabloid: "James met Caitlyn when she came over the bridge and sat with her for the entire leaving process.

"Caitlyn walked over the bridge, exclaimed to James: 'It’s you!'. They embraced, both were welling up. 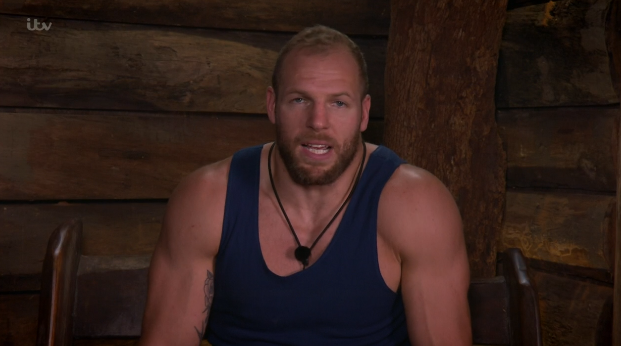 Jim was there for Caitlyn, according to a report (Credit: ITV)

"James accompanied Caitlyn throughout the entire eviction process and then when it was over they went for a Starbucks together to talk about the show and life in general. There’s a definite real friendship there."

Furthermore, it is believed Caitlyn was greeted by the other eliminated celebrities when she arrived at the Versace Hotel.

And in an Instagram Story a few hours later, the much-loved star revealed she had indeed been surprised by Sophia!

It is thought Sophia missed out on being on the bridge for Caitlyn as she left the camp because Sophia's flight from Los Angeles was delayed.

Caitlyn may have been eliminated - but I’m ready to get back to basics...Drinking wine out of the bottle with you hehe! ;) You have nothing but love from all of us in your family! Xoxo

Nonetheless, they soon made up for lost time - with Caitlyn enjoying a much-appreciated pampering at the Gold Coast luxury hotel where the celebrities and their families are put up.

Filming herself in her hotel room while wearing eye masks, Caitlyn told fans: "Just got out of the jungle, actually getting hair and make-up done, boy do I need it - I haven't had it in weeks!

"When I got out of the jungle, I've got a lot of friends there, but I had a big surprise when I got to the hotel..."

- I'm A Celebrity continues tonight at 9.20pm on ITV