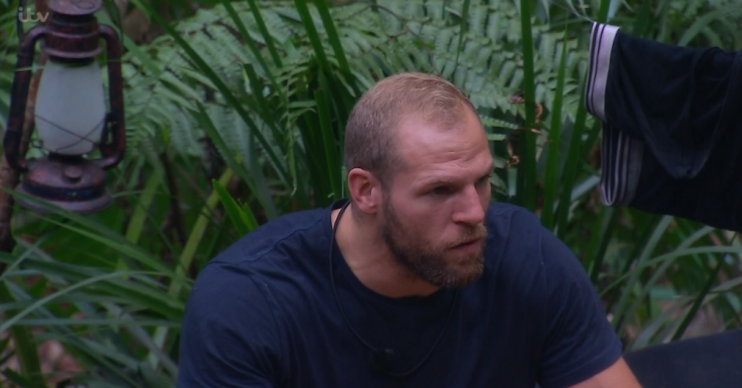 Kate apologised to James after the row

Viewers of I’m A Celebrity have slammed James Haskell for snapping at his campmates.

On Saturday night’s show, the campmates first had to decided which two of them want to take on the Bushtucker trial.

Many of the campmates suggested putting their names in a bag and picking them from there.

Cliff Parisi stood up and said: “Ladies and gentlemen, I would like to do this because anything to do with construction I’m really good at.”

James hit back: “We can draw it out of the hat still though. We’ve all figured out Cliff is doing it. The fairest way so everybody gets a fair shot to have some fun.”

Jacqueline Jossa then said: “Building isn’t really my fortay,” to which James cut in: “I don’t think you need a PhD in construction to be able to do it.”

Speaking to Andrew, James said: “It’s a [expletive] circus of stupidity. I can’t do it, I’m too intelligent and too switched on… just put your hand up!”

Viewers took aim at James and weren’t happy with him ‘snapping’ at the campmates.

James Haskell is infuriating 😡 talking about respect for women all the time like he’s a gentleman, then he’s slagging Kate off in the bushes for 10 mins calling her stupid for no reason 🤯 .. #whatanob #imaceleb @imacelebrity

Kate should not apologise to James. He shouldn’t have spoken to her like that! #ImACeleb