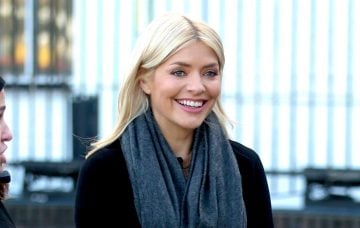 Holly Willoughby reveals Ant McPartlin’s reaction to her replacing him

Claims he was always part of the discussion

This Morning presenter Holly Willoughby has revealed how Ant McPartlin reacted to the news that she would replace him on reality show I’m A Celeb.

Holly is stepping in to his shoes alongside Dec Donnelly as Ant takes a year off to address his issues with addiction.

Speaking to the Daily Mail, Holly said that Ant was happy with the situation, claiming that he had been part of the decision making process.

She claimed that it was important to her to have Ant’s blessing before she accepted the job.

“He was part of the discussion from the off,” she said. “He’s happy that I’m looking after it until he gets back. It does help that we all know each other.”

She said she would find the experience of presenting with someone other than This Morning co-host Phillip Schofield odd.

The pair have presented This Morning together since 2009 – and also paired up for Dancing On Ice. They’re about to celebrate This Morning’s 30th anniversary.

When asked if presenting with Dec would be strange, she said she thought it would be easier for her than it would be for him.

“Yes,” she said, “But I think it’s going to be much weirder for Dec. I mean he’s only ever worked with Ant.”

Holly will be heading to Australia to film the show in November – and she’s taking husband Dan Baldwin and the couple’s three children with her.

“I don’t think I could have left them for that long,” she said. “Obviously they’re going to have a tutor, but their school was really understanding.”

There’s still no word on who’ll replace Holly on This Morning while she’s in the jungle – but speculation has landed on new mum Christine Lampard.

According to The Mirror, Christine – who welcomed her first child just yesterday – is the “natural first choice” to take over from Holly.

Are you looking forward to seeing Holly on I’m A Celeb? Leave us a comment on our Facebook page @EntertainmentDailyFix and let us know what you think!