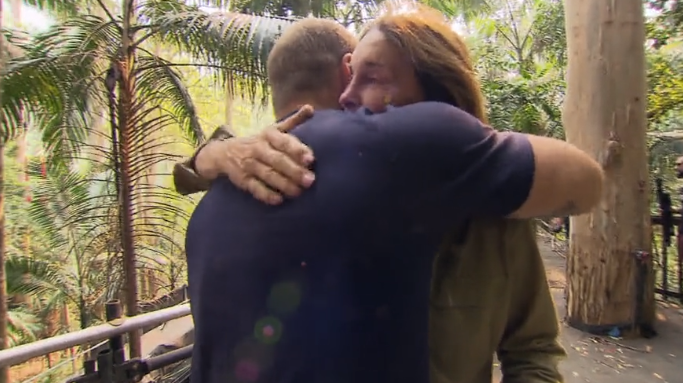 They praised his sweet gesture

Viewers of I’m A Celebrity: Extra Camp were left emotional after watching the moment James Haskell met Caitlyn Jenner on the bridge following her exit.

During Friday night’s episode, Caitlyn left the jungle and viewers were heartbroken after nobody appeared to greet her at the end of the bridge.

However, it was later revealed that her campmate James decided to welcome her out of the jungle.

Read more: I’m A Celebrity viewers ‘heartbroken’ as Caitlyn Jenner is ‘snubbed’ by kids in letters from home

As she walked off the bridge, Caitlyn spotted James and exclaimed: “Oh my God, look who’s here!”

James said: “I come to meet you babe,” as the pair hugged.

James continued: “You were amazing,” to which Caitlyn said: “We missed you.”

The pair then got dropped to a local Starbucks and picked up a coffee and treat.

Arriving back at the hotel, Caitlyn was then greeted by the rest of her eliminated campmates and their loved ones.

Viewers were left emotional and shared their thoughts on Twitter.

James meeting Caityln and the end of the bridge, i’m crying!

One person said: “Omg James meeting Caityln and the end of the bridge, i’m crying!”

Another wrote: “None of her family did, but James going to meet Caitlyn coming out of the jungle was a brill gesture.”

A third added: “James meeting Caitlyn at the end of the bridge! I’m sorry, I take back everything I said bad about him!”

None of her family did, but James going to meet Caitlyn coming out of the jungle was a brill gesture. #ImACeleb #ExtraCamp #IACSuperfan

#ExtraCamp #ImACeleb James meeting Caitlyn at the end of the bridge! I’m sorry, I take back everything I said bad about him! 😭😭😭

james going to meet caitlyn is so sweet #ExtraCamp

During her interview on Extra Camp, Caitlyn said of her jungle journey: “One of the reasons I wanted to do this show is because obviously I’m trans and I’ve had to deal with this all my life.

“There’s a lot of other people that are behind closed doors. Everybody’s got stuff and everybody’s got things that they have to deal with.

“For me, this is what I had to deal with my whole life and how I overcame so many things. I wanted to be a positive inspiration to people, that you know what you can have differences, you can have issues, but just live your life authentically.

“It doesn’t mean it’s the end of your life, that you can go out, you can do stuff like this, you can be in the public eye. There is a life after it.

“And so I kinda wanted to show that, and generally inspire other people.”