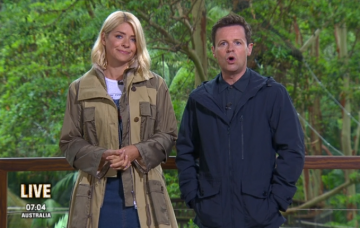 Dec Donnelly has poked fun at Anne Hegerty following her exit from the I’m A Celebrity jungle on Wednesday night.

The Chase star Anne, 60, was ruled out of a number of Bushtucker trials on medical grounds during her stint Down Under and Dec had made a running joke of it throughout the series.

And on Thursday night’s show, Dec couldn’t resist but make another joke about Anne.

Dec quipped: “So many questions!

He joked: “And what about us two? We’ve got nobody to rule out on medical grounds anymore.

“I might nip to the hotel and rule her out of something just for old time’s sake.”

Viewers watching from home were left divided over Dec’s joke and shared their thoughts on Twitter.

One person said: “I love Dec but I won’t miss the jokes about Anne,” while another wrote: “Seriously, Dec, that was just rude. Stop picking on Anne.”

I love Dec but I won’t miss the jokes about Anne. #ImACeleb

However, others were amused by Dec’s joke.

A third tweeted: “Dec talking about Anne sitting there and being ruled out on medical grounds has me creasing already.”

“Dec saying he can’t rule Anne out of any more trials on medical ground,” another said, followed by laughing face emojis.

Anne was voted off the show during Wednesday night’s episode.

The quiz expert won over the nation during her stint in the jungle after fans noticed her incredible transformation since entering the Aussie jungle.

However, Anne – who has Asperger’s – admitted she did struggle adapting to jungle life during an appearance on This Morning on Thursday.

She said: “I was technically expecting everything that happened, but I hadn’t really properly imagined it to myself and when we went into Snake Rock I just got more and more depressed.

What did you think about Dec’s joke about Anne? Leave us a comment on our Facebook page @EntertainmentDailyFix and let us know what you think!