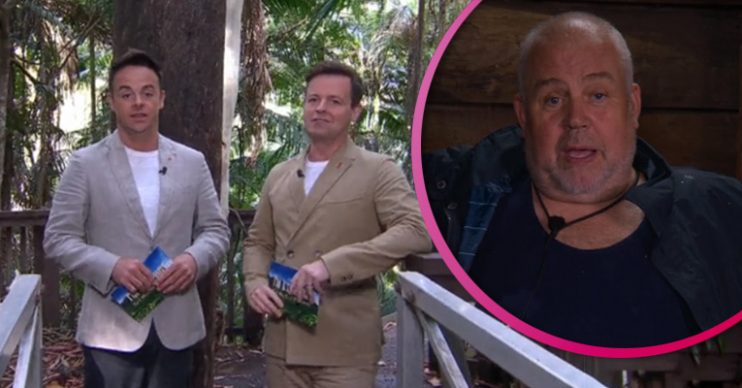 He's been in the jungle for almost two weeks

TV duo Ant McPartlin and Dec Donnelly have claimed I’m A Celebrity campmate Cliff Parisi has lost over a stone since being in the jungle.

The former EastEnders actor has been in camp for almost two weeks and it’s been said that he’s been dropping the pounds thanks to the small food portions.

During Sunday night’s show, Ant and Dec made a comment about Cliff’s weight as they joked about him showing his bum while running for shelter during a storm.

Read more: I’m A Celebrity fans in hysterics over Ant and Dec’s ‘dig’ at Cliff Parisi

A storm hit camp and the celebrities rushed to find shelter with their belongings.

At one point, Cliff – who played Minty Peterson in EastEnders – was seen running towards Caitlyn Jenner’s ‘manor’, where she’s been sleeping alongside Andy Whyment after being appointed camp leader.

But his trousers were slightly too big and his bottom was on show.

After the footage, the cameras returned to Ant and Dec and they couldn’t resist making a joke.

Ant said: “What a storm! There was a flash and then there was a huge crack…”

Dec quipped: “That was just Cliff’s trousers falling down,” to which Ant pointed out: “He’s lost a stone-and-a-half!”

That’s the quickest we’ve seen him move since he’s been here!

Ant added: “That’s the quickest we’ve seen him move since he’s been here!”

Dec said: “Sprinty Minty. He was off.”

Ent Daily has contacted I’m A Celebrity for comment.

Viewers were amused by Cliff accidentally flashing his bum and shared their jokes on Twitter.

One person said: “Cliff running with his arse out!!!”

A third added: “The only time you see Cliff on the telly is when his crack is out.”