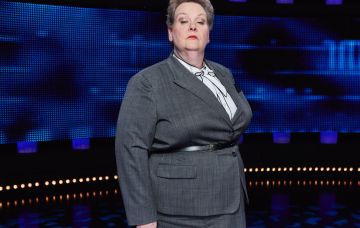 She'll be entertaining us all in the jungle from next week

Anne Hegerty has revealed women automatically think she is a lesbian.

The 60-year-old star – who has been a top quizzer on The Chase for eight years  – explained how ladies often send her suggestive tweets making assumptions about her sexuality, even though she confirms she is actually straight.

She admitted: “I say I’m very flattered, but your gaydar is broken.

“Quite often they say, ‘Yes, I didn’t think you were, just thought I’d try my luck.”

“It does tend to be more women than me, which does feel weird.

But you know, hey, any kind of attention’s nice.”

With a regular audience of three to five million, The Chase is one ITV’s most successful daytime shows ever, but the TV star is boosting her profile further by going into the jungle with the likes of John Barrowman, Emily Atack and Fleur East on this year’s season of ‘I’m A Celebrity… Get Me Out Of Here!’

Although excited for the experience, she has acknowledged she is under pressure by appearing on the show and said she is worried about “letting people down”.

She previously said: “I don’t take much nonsense, but I take more nonsense from people than you might think.

“If I was to go in the jungle I would be worried about letting people down.”

I’m A Celebrity… Get Me Out Of Here! starts on Sunday, November 18 on ITV.