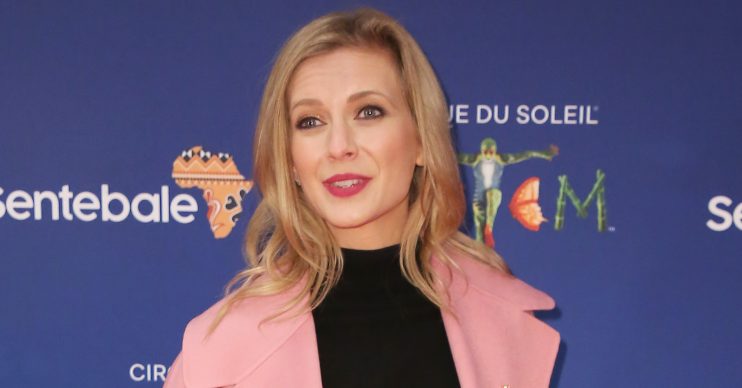 She revealed the pregnancy last month

Maths whiz Rachel, 33, who is expecting her first child with the former Strictly Come Dancing pro, 39, brought up the baby’s gender.

Speaking on the Channel 4 programme, they revealed to fans that they don’t know what they’re having – but only because it’s “too early” to tell yet.

She burst into giggles, before adding: “But they said it was too early, so I might just be insulting our son.”

In another part of the programme the celebs sat watching an episode of Countdown, which Rachel has co-hosted since 2009.

Unfortunately for viewers hoping to see what Rachel and Pasha thought of it, the pair’s reactions didn’t feature in the programme.

Rachel announced her pregnancy last month, and in true Countdown style she broke the news in the form of a conundrum.

The pic featured the famous Countdown board with the letters R-T-I-N-Y-M-A-T-E and Rachel standing next to it, cradling her bump and beaming at the camera.

She told fans: “Pash and I have a conundrum for you… you have till December to work it out!”

The two met when they were partnered on Strictly Come Dancing in 2013 and became romantically involved the following year, after Rachel had separated from husband-of-one-year Jamie Gilbert.

Elsewhere on Celebrity Gogglebox, viewers watching singer Kelly Osbourne noticed something rather peculiar about her voice.

A number of people on Twitter were convinced she was starting to sound exactly like her famous mum, former X Factor judge Sharon Osbourne.

Pop group Little Mix were also on the programme, causing a stir during a scene in which they watched Channel 4 dating show Naked Attraction.

Someone in the programme referred to her ‘jam jar’ vagina and three of the girls, Jesy Nelson, Jade Thirlwall and Leigh-Anne Pinnock, had to explain to bandmate Perrie Edwards what the term meant.

Other guests on the first episode of Celebrity Gogglebox included presenter Rylan Clark-Neal and I’m A Celebrity favourite Georgia ‘Toff’ Toffolo, who shared a couch with jungle pal Stanley Johnson.