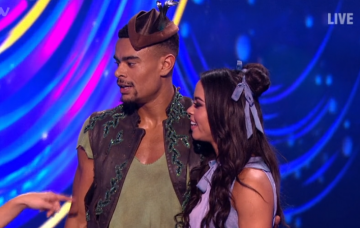 We’re getting to the business end of Dancing On Ice now, with the quarter-finals due to be screened live on ITV tonight.

And it sounds like the pressure may be getting to one or two of the contestants.

During rehearsals for this evening’s showdown, one of the couples came a cropper while attempting a tricky routine, ending up horizontal on the ice.

Former Love Island star Wes Nelson, 20, and his skating partner Vanessa Bauer were trying to master the notoriously difficult Detroiter lift when Wes lost his footing, causing the couple to land heavily on the cold surface.

A doctor quickly arrived on the scene to examine Wes’s wrist and forearm, and luckily found that he hadn’t done himself a serious injury.

However, it was decided that Wes and Vanessa would drop the lift from their routine, to avoid a similar mishap.

A Dancing On Ice spokesperson told The Sun: “Wes was assessed by show medics, and as a result they will be changing their routine for this evening’s performance.”

The incident will come as a blow to Wes, who is the bookies’ favourite to win the competition.

To be fair, though, he and Vanessa aren’t the first couple to suffer a slip-up in this year’s series.

Yesterday, we reported that James Jordan had dropped his skating partner Alexandra Schauman on her head during rehearsals.

Luckily, they will also be OK to take part in tonight’s show.

James and Wes will come up against Brian McFadden, Melody Thornton and Saara Alto, and their respective partners.

Let’s just hope they can stay on their feet!