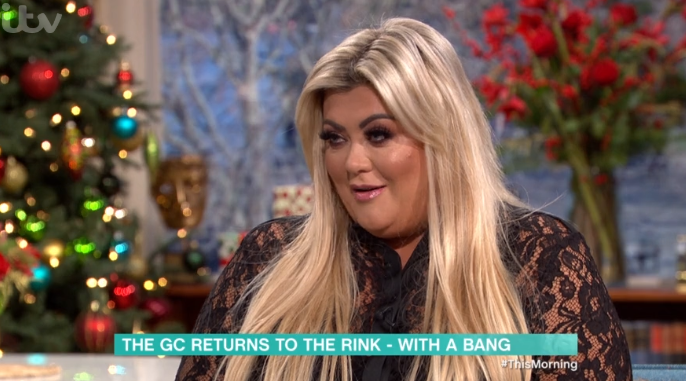 Nonetheless, she reckons she got back on the rink "like a duck to water"

TOWIE favourite Gemma Collins has revealed her body still suffers from the ‘trauma’ of her experience on Dancing On Ice earlier this year.

The 38-year-old TV personality infuriated and entertained viewers in almost equal amounts during her run on the ITV skating show, highlighted by her taking a ridiculous spill on the ice.

Ahead of her appearance in the festive special episode, The GC admitted to This Morning hosts Ruth Langsford and Eamonn Holmes she has not fully recovered from the knocks she took – but insisted she was not afraid about lacing up her skates again.

“I wasn’t nervous at all,” she told Ruth.

“I was buzzing to get back on that ice, who’d have thought?”

Gemma continued: “It was quite a big moment for me because obviously the trauma my knee suffered – the swelling has just gone down… on my right knee, I’ve still got swelling on the left but I was just like a duck to water.

I really learned endurance on that show.

“I missed the ice. It was great to be back on.”

Adding she had gone through “lots of trauma” with her injury, Gemma also suggested she feels she demonstrated resilience by not giving up.

She went on: “I really learned endurance on that show. I had no choice but to get back on that ice and perform every week. It was tough at the time but I’m a true believer in fighting my fears.

“So I just had to face it and I didn’t fall over in rehearsal!”

Reflecting on Michael Barrymore’s withdrawal from the show, Gemma joked ahead of the announcement that Radzi Chinyanganya will replace the former Strike It Lucky host that she could step in.

She said: “I feel absolutely gutted [for him]. I was there last week filming the Dancing On Ice Christmas special. He is so funny and obviously this was his big comeback. I feel it’s a real shame.

Celebrities. Ice skates. Christmas. It's gonna be amazing!#DancingOnIce at Christmas, 7pm on Sunday 22nd December. Don't miss it on @itv and @wearestv1 ⛸✨

“He weren’t that good on the ice, I’m going to be honest, he was okay. But you know what maybe it’s not meant to be for him this time.”

Gemma continued: “I’m happy to stand in but they have a stand in. Let’s hope nothing happens to that stand in.

“It’s such a shame. He was really looking forward to coming back to the TV and had everyone in stitches as you can imagine.”

Dancing On Ice returns for another series on Sunday 5th January. The Christmas special will be shown on ITV on Sunday 22nd December 22 at 7pm.

Despite ‘that’ fall last year, @missgemcollins is getting back on the ice this weekend for the @dancingonice Christmas special ⛸️ pic.twitter.com/4rTV1V2xlX