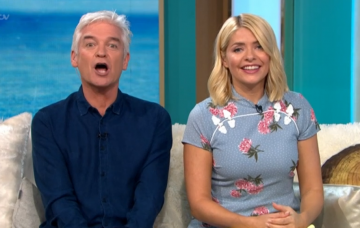 Gemma Collins and Richard Blackwood confirmed for Dancing On Ice

This is going to be SO good!

During Monday’s This Morning, the pair were announced as the first two stars taking to the ice rink.

Gemma, 37, and Richard, 46, admitted they’re both excited and nervous to get their skates on and entertain viewers in January.

Speaking about doing the show, Gemma said: “As a young girl, my brother used to play ice hockey so I was at the ice rink quite a lot.

“I can remember seeing some white boots in the skating shop and I was like, ‘mum please let me be an ice-skater.'”

When asked if she knows how hard doing the show is, Gemma said: “I know how hard it is. I’ve done my research, don’t worry. I am scared, I am nervous, I don’t know how they’re going to lift me up and how fast I can move on the ice.

Meanwhile, Richard admitted he used to skate as a child when he lived in Sweden.

He said: “I used to skate quite a lot when I was younger on frozen lakes and an ice-skating rink.”

When asked how good he is at skating, Richard continued: “I can skate but I normally dance on dry land so dancing and skating are two different things that I’ve got to combine, but I can skate, yeah.”

Speaking about his dancing talents, Richard added: “I can move I’m not going to lie. I can shake my stuff. I’m dangerous.”

Gemma went on to reveal she’s already asked Dancing On Ice producers to let her come out on the rink to Beyonce’s hit track Crazy In Love.

“The training is going to be intense but I’ve heard you really shape up during the show, so I might come out with a dream body after all. Me and [my boyfriend] Arg have put on a bit of weight over the summer.”

The pair revealed their training for the show starts next week.

Read more: The rumoured celebrity line-up for Dancing On Ice 2019

Richard admitted the one thing he isn’t looking forward to is the tight-fitted outfits.

He said: “I’m training because I know they are going to put a brother in some tight stuff, right.

Dancing On Ice returns early next year with Holly Willoughby and Phillip Schofield as hosts.

Are you looking forward to the new series of Dancing On Ice? Leave us a comment on our Facebook page @EntertainmentDailyFix and let us know what you think of this story.