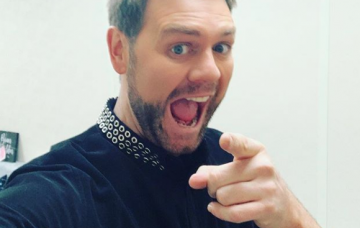 The ITV reality show is taking a physical toll

But for Dancing On Ice star Brian McFadden – as well as his co-stars Wes Nelson and Ryan Sidebottom – that way apparently involves therapy in the form of pizza.

The Westlife singer took to Instagram to share a fun picture of the Love Island star and cricketer, captioning it: “Last night’s therapy! 3 boys, pizza, beer and a movie! (The hangover) feeling a lot better!!! @ryansidebottom_official @wes.nelson.”

His 179k followers found the post hilarious, with one writing: “Keep looking at Brian’s funny face. You must stick around to see what he does on the next show. He always makes me giggle. Hope you find many more reasons to smile. X x.”

Another commented: “🤙ya’ll deserve a little bit of R&R.” A third said: “You deserve some down time, good luck on Sun ❤️❤️.”

It looked like presenter Kem Cetinay got involved in the banter, too, as Wes uploaded a video of him in make-up, captioning it: “I gave Kem a makeover.”

Brian has swiftly become one of the most popular celebrities on the ITV talent show.

He’s become especially close to controversial Gemma Collins, despite admitting she can be “rude”.

The TOWIE star even admitted she would’ve “quit” if not for the Irish singer.

Which is why fans were left worried this week when the dad-of-two revealed a back injury might mean his leaving the show early.

The 38-year-old singer has been working with the show’s physio after damaging his rotator cuff, a group of muscles and tendons that surround the shoulder joint, following a fall last week.

A backstage source told The Sun: “Brian has been throwing himself into training but is finding it really tough as his back is giving him issues.

“He has been to see the show’s physio, but it’s looking increasingly likely that he will have to pull out of the show.

“Obviously he’s determined to keep trying but he knows there’s only so much he can do without inflicting a serious injury and causing long-term damage.”

A spokesman for the ITV show said: “Brian has a bad back and is currently being monitored by our show physio.”

Many of his fans have commented on his social media wishing him a speedy recovery, with one writing: “Hope your back’s feeling better x.” Another added: “I hope your bad back getting better and better everyday bri 💙 @brianmcfadden123.”

How do you unwind during busy periods? Leave us a comment on our Facebook page @EntertainmentDailyFix and let us know what you think.