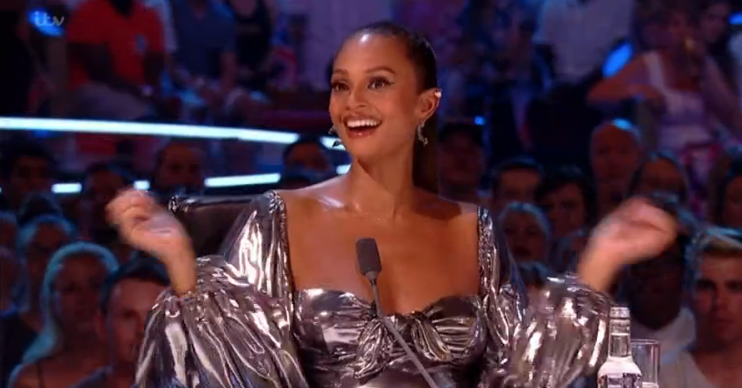 Everyone is making the same joke about Alesha Dixon’s outfit on BGT: The Champions

Fans wondered why she looked like she was about to go in the oven!

BGT: The Champions judge Alesha Dixon walked out on tonight’s show wearing a rather eye-popping outfit — and everyone started making the same joke.

The heavily pregnant panellist looked radiant in a silver-coloured satin frock for the final heat of the series.

And fans immediately took to social media to point out what it reminded them of.

It’s Saturday of course! So @bgt Champions returns at 8:30pm on @ITV #BGTChampions #BGT See you there! pic.twitter.com/WKDwiegjNl

One tweeted: “Alesha looks like she could do with a good hour to hour & a half in a fan assisted oven.”

Another wrote: “Alesha Dixon looks like she’s been wrapped in foil and ready to go in the oven!”

A third echoed: “Alesha looks like a turkey about to go in the oven.”

One Twitter user quipped: “Wonder if Alesha shouts gobble gobble when she presses the GB.”

Someone else joked: “Who dressed Alesha, Bernard Matthews?”

Alesha Dixon looks like she’s been wrapped in foil and ready to go in the oven! @BGT #bgt #BGTChampions #BGTTheChampions

Alesha looks like someone’s about to shove her in the oven and bake her for an hour. #BGTChampions

Aside from the light-hearted jokes, many fans tweeted how good she looked in the distinctive dress.

It was Alesha’s turn to have the golden buzzer on tonight’s episode, the final heat of the series before the grand final.

* BGT: The Champions concludes on ITV next Saturday night.