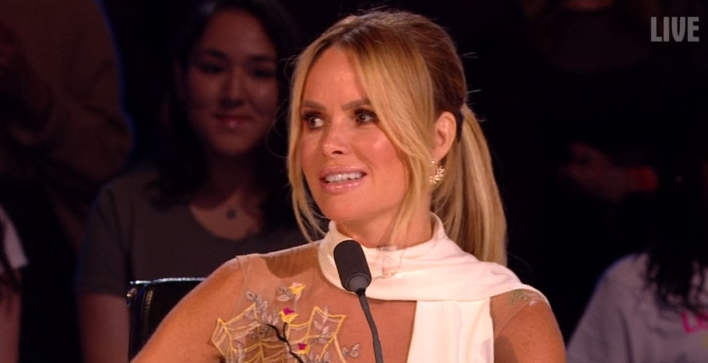 It's a family show, Amanda!

Britain’s Got Talent could face an investigation by TV regulators Ofcom after viewers complained about Amanda Holden’s revealing dress.

As Ent Daily reported, the 48 year old wore a floor-length Nicolas Jebran nude gown with sheer panelling and only an embroidered spider’s web covering her modesty.

After she made her entrance in the dress, one viewer tweeted: “What is it with Amanda Holden and flaunting as much of her chest that’s allowed before the watershed?”

Read more: Liam Payne reveals he had to ‘learn’ how to become a father

They added: “She’s beautiful but her dress sense leaves a lot to be desired!!”

Some viewers took their complaints one step further, reporting the fact that the star had worn a “topless” dress on a “family show” to Ofcom.

The Sun reports that a total of 22 complaints were received about last night’s show, with nine of those being about Amanda’s dress.

In a statement, the regulators said: “We are assessing these complaints against our broadcasting rules, but are yet to decide whether or not to investigate.”

Before the new series started, it was reported that Amanda had ditched her usual stylist, Angie Smith, after one of her outfits received 663 Ofcom complaints.

She is now working with stylist Karl Willett, with viewers left divided over the cobalt blue dress he picked for Amanda to wear on the show the previous evening.

This latest incident isn’t the first time Amanda has been in trouble with Ofcom this series.

She also landed herself in hot water after she swore while taking part in a terrifying act during the first live semi-final.

Some 192 viewers complained to the regulators about the segment.

Tune into the live show tonight at 7.30 on ITV to see if the star manages to stay out of trouble!

What do you think of Amanda’s dress and the fact that some reported it to the regulators? Head over to our Facebook page @EntertainmentDailyFix and let us know!