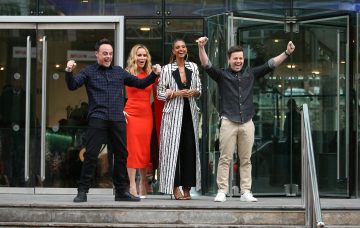 Ant McPartlin looked the picture of happiness as he mucked about with Declan Donnelly at Britain’s Got Talent auditions.

The presenting duo were in Manchester as a fresh batch of auditions got underway and Ant was beaming as they filmed the ITV show.

The show marks Ant’s big return to TV after he had a break last year following personal issues.

The 43-year-old cracked jokes with co-host and best pal Dec, as they shot scenes with BGT judges Amanda Holden and Alesha Dixon.

Ant seemed relaxed and was all smiles as he chatted with Dec, also 43.

The boys had plenty to smile about, as earlier in the day they tweeted about receiving a gong for their show, Saturday Night Takeaway, at the Broadcast Awards.

They tweeted: “Wow! This is amazing. Thank you @Broadcastnow @BroadcastAwards. What wonderful comments. Congrats to the brilliant and hardworking @itvtakeaway team X.”

Last year, Ant was charged with drink-driving and fined £86,000, after he crashed his car.

He went to rehab and took time out of the limelight, leaving Dec to host BGT on his own last year and Holly Willoughby stood in for Ant on I’m A Celebrity… Get Me Out Of Here!

But Ant, who is dating his former PA Anne-Marie Corbett following his divorce from Lisa Armstrong, looked back on track and right at home with his BGT family in these latest snaps.

And Judge David Walliams continued the laughs for Ant and co.

The comedian rocked up in a van reminiscent of the A-Team’s motor to pick them all up and head to the studio!

Ant’s big grin may also have something to do with the adorable new puppies he and Anne-Marie got recently!

What do you think of Ant’s return? Leave us a comment on our Facebook page @EntertainmentDailyFix and let us know what you think.