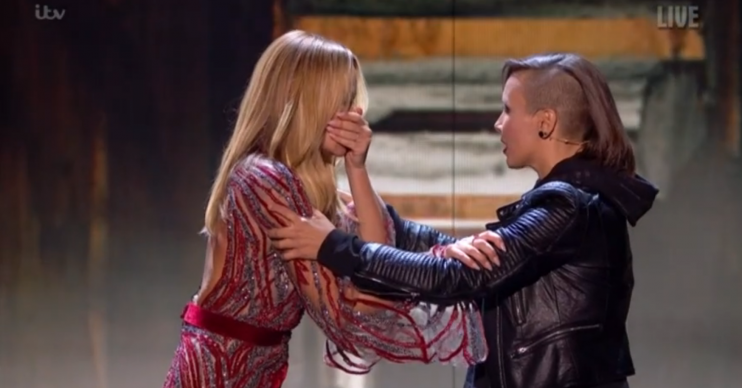 Judge screams in terror during magic act The Haunting

The judge was clearly terrified and screamed out the expletive during a performance by magician Elizabeth, aka The Haunting.

Just like in the auditions, Amanda was freaked out by the sudden appearance of a mysterious 19th-century character called Agatha, whose “ghost” walked through a cracked mirror in a darkened room backstage.

The panellist was led back to the stage through the Apollo theatre’s corridors by Agatha, who was replaced by Elizabeth before they reemerged in front of the audience.

But when Amanda was turned around to face her, she screamed the very unfortunate swear word.

When the act finished and Amanda was back behind the safety of the judges’ table, she said: “I just want to apologise if I said a terrible word.”

Simon Cowell said: “You did,” before joking: “Not only did we hear everything, it was like being next door to you on your honeymoon night.”

He told Elizabeth: “Compared to everyone else so far, this is by far the most interesting act by a mile that we’ve seen.

“I know we’re going to get into trouble over this, don’t try this at home, apologise for the swearing but it was amazing.”

BGT viewers found the blunder hilarious and took to social media to share their delight.

@AmandaHolden swearing on live TV has been the best thing to happen so far this evening. The auditions are now the best part of this show. #bgt #BritainsGotTalent

I’m absolutely creased at @AmandaHolden shouting f**k 😂. But she’s braver then me! No way would I have done that. #bgt

Read more: Britain’s Got Talent viewers left baffled by act who ‘disappeared’ halfway through the show

Did you hear Amanda’s F-bomb? Would the act have left you as terrified? Leave us a comment on our Facebook page @EntertainmentDailyFix and let us know what you think!