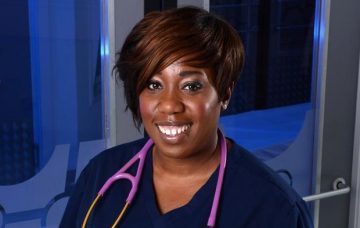 Chizzy Akudolu is returning to Holby City in time for Christmas

Holby City favourite Chizzy Akudolu will return as Dr Mo Effanga to the BBC One series later this year – but only for a couple of months.

Former Strictly Come Dancing contestant Chizzy, 44, revealed this afternoon she was thrilled to be heading back to Darwin Ward in time for Christmas.

“Well, I’m back on Holby. It’s only for two months though,” she announced on Loose Women.

“I love the show. Going back was so – oh my gosh – like coming home.

“Like putting on your duvet, you just know you are home. But I know that I have to do other stuff. We are nomads actors.

“I’m really honoured to go back in.”

Her character exited Holby after being offered a job on London – and initially planned to leave with her son but not partner Mr T.

However, at the last minute, Dr Mo questioned her own reasoning for making the move without her man and reunited with him before heading off for a new start together.

Holby co-star Rosie Marcel – who plays Jac Naylor – was also a guest on the ITV show and revealed Chizzy has been a much-missed presence during filming since Mo’s departure in June 2017.

Rosie said: “It’s lovely [to have her back]. She’s just an amazing personality.

“She brings so much life to the set and it’s very dull without her.

“When she left I was actually really heartbroken because we have such a lovely friendship and such a great friendship on screen as well. We really cried – we couldn’t do that last speech at all.”

We would definitely want these two around in an emergency. But never leave @chizzyakudolu hanging… ✋ pic.twitter.com/zmBOzs6JcX

Holby fans were delighted by the news, giving the star a warm welcome back on Twitter.

But many added they wished she was coming back for a longer run.

Glad to have chizzy back. Disappointed it’s only for 2 months though. X

Chizzy: I’m back on Holby!

Chizzy: only for two months!

YAYYYY CHIZZY IS BACK IN HOLBY CITY FOR TWO MONTHS 🙌🏻🙌🏻🙌🏻

Simon Harper, executive producer of Holby City and Casualty, commented: “Chizzy is an all-time audience favourite and it’s glorious to have her back for a stint.

“Mo comes sweeping in after huge, dramatic events at Holby with all her trademark warmth and humour intact – and is determined to change one particular life on Darwin for the better.”

Are you glad that Chizzy is returning to Holby City? Let us know what you think by leaving us a comment on our Facebook page @EntertainmentDailyFix!