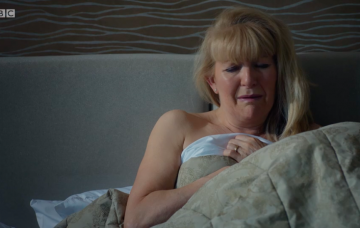 We can't believe she'd do this to Charlie

Casualty fans were left shocked and horrified on Saturday night, when they watched Duffy cheat on her beloved husband, Charlie.

The dramatic episode began when the nurse woke up naked in a hotel bed, surrounded by clothes strewn across the floor.

Bill emerged from the bathroom in a dressing gown as a distraught-looking Duffy asked him how much she’d had to drink.

“Just go, please Bill,” she then begged of her childhood sweetheart, adding: “I can’t see you again, do you understand?”

Viewers of the BBC hospital drama were divided over the harrowing storyline.

Some were sympathetic, with one commenting: “Duffy clearly regrets what she did, cheating is never the answer, it’s inexcusable and she is paying the emotional toll, but if she is honest with Charlie and talks about their problems together with complete transparency, then they can most likely resuscitate their rel! #Casualty.”

Another added: “Just sobbed, the way Duffy was so vulnerable and Bill took advantage of that. Just want to give @cathship27 a big hug absolutely amazing performance, you’re so incredibly talented and on behalf of all casualty fans we love you soo much 💗💕.”

Others were horrified by her behaviour tweeting: “Duffy how could you? #Casualty.”

A third wrote: “Eeh Duffy was on a wild one last night 👀 #Casualty.”

Some fans were so shocked, they struggled to believe it could happen, writing: “Really not liking the Duffy storyline. It’s ridiculous and so out of character. #Casualty.”

Later in the episode Duffy’s lies begin to unravel, as Charlie checks her phone and questions her story about staying in the hotel alone.

Bill later shows up at the hospital where Duffy tells him again: “It was a mistake.”

The cheating follows a dark storyline about Duffy’s battle with depression, and she has so far refused to seek help for it.

She said: “We are looking at deception and cheating here. It’s not nice to play. I felt very strange just doing the scenes with Derek [Thompson, who plays Charlie]. Just standing there and basically being a big, fat liar!”

It was an amazing episode, but please don’t let it be the end of Charlie and Duffy’s marriage. They’re our faves.

What do you think of Duffy’s behaviour? Leave us a comment on our Facebook page @EntertainmentDailyFix and let us know what you think.