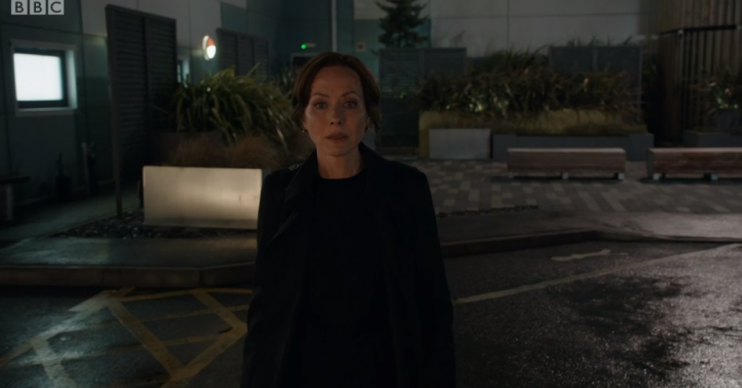 She departed in Saturday's series finale

The 52-year-old star’s alter ego was written out of the show during the series finale over the weekend after confiding in Charlie Fairhead (Derek Thompson) about her addiction to prescription drugs.

He then ordered to leave the emergency department.

Giving viewers hope for the character’s future, Amanda told Digital Spy: “We are resetting Connie, which is really exciting for me.

“We’ve seen her vulnerable side, but I am now pushing to get back into that strong, strident Connie that viewers love.

“I go back to work very soon, so she will be off screen for a while. But she will come back so much stronger.

“When you hit rock bottom, there’s no one else left but you. You have to look at yourself, and that’s what she does. She has a chance to look at herself.”

Amanda – who originally appeared on sister show Holby City from 2004 to 2010 before joining the cast of Casualty four years later – explained her character’s heartbreaking exit has seen her hit “rock bottom”.

She added that Connie “knows that there is no one left to help her” and has left because she’s got to sort herself out.

“And that’s where the journey of recuperation begins. It is so sad to see this happen to such a beautifully strong, independent woman.

“I’ve always been so proud to have an example of a woman who’s independent of a man, which isn’t the usual portrayal on film and TV.”

Last week Amanda spoke openly about the anxiety she suffered following her breast cancer fight saying it caused her to ‘crumble’ and collapse at work.

The star, 52, told The Mirror her PTSD left her drained – despite her determination to resume her acting career after a wearying health battle which saw her undergo a mastectomy, chemo and radiotherapy.

Her cancer diagnosis, coming just one day after the birth of her second son.

Speaking about her keeling over at the studios of Holby City, she admitted: “I literally crumbled down on my haunches at the steps, going up to reception. And there were only five steps and I couldn’t make it up.”

She also acknowledges she returned to her busy work commitments before dealing with how her cancer diagnosis and treatment had affected her.

Amanda continued: “At the time I couldn’t because I’d just had, what I call, my hand-to-hand combat of fighting the cancer, so I didn’t have time to look at my emotional and psychological state.”

However, Amanda is convinced therapy has helped her cope and manage her symptoms – describing the process as “essential”.

Casualty’s new series returns on Saturday August 17 at 9.20pm on BBC One.