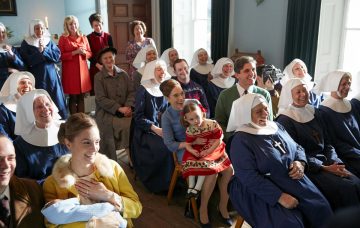 The last series of Call The Midwife ended on a bittersweet note as the residents of Nonnatus House came together to celebrate the birthday of Sister Monica Joan.

Even beloved characters Chummy and Trixie were there – captured on film at least.

And, of course, footage of Barbara Gilbert was especially poignant coming just weeks after her tragic death.

Through tears, fans saw the camera linger on a red rose and toy carousel on Barbara’s freshly dug grave after her tragic death of septicaemia.

With the Christmas special and series eight just weeks away, here’s what we know about the new series so far…

Has filming finished on Call The Midwife?

We know that filming for season eight has wrapped. The show shared a post on social media saying it was now on a “countdown to transmission”.

In a post on the official Call The Midwife Facebook page, a message to their 556,970 followers posted on 12 October read: “Series 8 filming for Call the Midwife was completed this evening!!

“It is traditional to mark the occasion with an end-of shoot photograph taken with the star appearing in the last scene, along with the final ‘slate’ – the clapperboard marking the scene for editing purposes.”

NEWS: It's a wrap!!Series 8 filming for Call the Midwife was completed this evening!!It is traditional to mark the…

Read more: The Inbetweeners is coming back to TV screens

The post continued: “This year it was our wonderful Jennifer Kirby (Nurse Valerie) who did the honours for us! So now….the countdown begins to transmission!!

“You will be seeing us very soon for a brand new Christmas Special episode, followed by series 8 early in 2019.

“Make sure to check back here for all of the news and stories as we gear up to another year in the life of Nonnatus House. Don’t miss it!”

What happens in the 2018 Call The Midwife Christmas special?

She plays a “forthright and indefatigable sister from the Order” who will also star in the first episode of series eight.

And she bring with her four Chinese orphans!

The final addition to the cast is Georgie Glen, who will appear as new receptionist at Dr Turner’s surgery, Miss Higgins.

Earlier this week One Foot In The Grave star Annette Crosbie confirmed that she would also be taking part… we DO believe it!

What will happen in the eighth series of Call The Midwife?

The Christmas special will be followed by eight more episodes in the New Year.

Sadly, Barbara’s on-screen husband Reverend Tom Hereward (Jack Ashton) will not be back for the new series as he departs for missionary work.

However, Helen George’s Nurse Trixie Franklin will be back after missing much of last series due to her own maternity leave. In the show, she was seeking treatment for alcoholism.

The BBC announced: “We’re delighted to confirm that our Trixie is back where she belongs for Christmas and the forthcoming series.”

Series eight moves into the spring of 1964 where anticipation is building for a new royal baby.

With the addition of the two new Sisters and the return of Trixie, Nonnatus House “feels full once more”.

But when the midwives are introduced to their new midwifery bags, old Sister Monica Joan becomes distressed as her dementia takes a turn for the worse.

Creator Heidi Thomas said: “It is an immense privilege to be starting work on series eight of Call The Midwife, and we can’t wait to share the events of 1964 with our loyal and passionate audience.

Will there be a ninth series of Call The Midwife?

The BBC recommissioned the long-running series for three new instalments in 2016.

This means the drama will eventually move into season nine and be on air until at least 2020.

Are you looking forward to the next series of Call The Midwife? Leave us a comment on our Facebook page @EntertainmentDailyFix and let us know what you think!