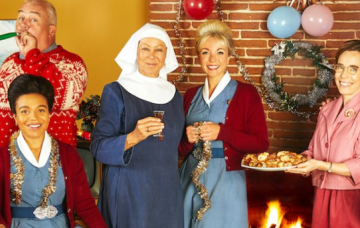 We are so excited

There’s set to be some great festive telly this year – but nothing ever tops the Call The Midwife Christmas special.

And now we’ve had an exciting glimpse of what’s to come in the episode, after the BBC dropped an AMAZING new trailer.

In the short video, we see the arrival of some orphans at Nonnatus House, with new nun, Sister Mildred begging: “I’m hoping you’ll tell me there’s room at the inn?”

Sister Julienne, played by the wonderful Jenny Agutter, looks troubled as the question of who will be voted Superior is raised.

We also get a glimpse of Nurse Trixie Franklin, played by Helen George, who arrives looking festive in red.

Fans were thrilled by the festive-looking trailer.

One tweeted: “Cannot wait. Soooooo excited for the Christmas special and new series 😃.”

Another commented: “Christmas isn’t Christmas without Call the Midwife.”

A third said: :Wooooo. Still the best show in the telly.” While a fourth added: “Can’t wait. My favourite programme. 💛💛💛.”

The 90-minute special will air on Tuesday 25 December at 7.45pm, kicking off the brand new eighth series which will continue in 2019.

We’ll be meeting some new faces in the eight-episode new series.

Sister Mildred is arriving in the Christmas special, played by Harry Potter actress Miriam Margolyes. She’s described by writers as a “forthright and indefatigable sister from the Order.”

This sounds like it could be the best Christmas special – and best series – yet. Bring on Christmas Day.

Are you excited about the show’s return? Leave us a comment on our Facebook page @EntertainmentDailyFix and let us know what you think.