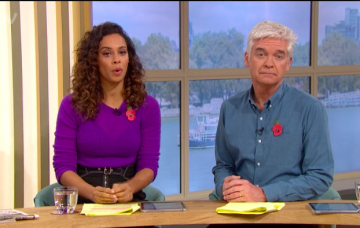 This Morning viewers shocked by “feeder” whose girlfriend gained 12 stone

It's a controversial subject

This Morning has featured some out-there stories in the past, but this might just take the, er, cake.

Presenters Phillip Schofield and Rochelle Humes interviewed a “feeder” and his fiancée on Wednesday’s show – and fans flocked to social media to discuss the shocking segment.

Speaking on a video link from Brisbane in Australia, Rosie explained: “Feedism in a nutshell – it’s someone who’s attracted to someone [big] and they like to eat sensually and gain weight.”

Jeff, who is from the Netherlands, added: “Everyone’s got their own likings and desires, and [feedism] is one of them.”

Explaining that she’s “a feedee” and Jeff is a “feeder,” Rosie admitted she didn’t really know how they’d come to the preference, only that they’d both realised after reading up about the subject.

The pair spoke for a year online before meeting, and Jeff told Phillip and Rochelle how it was the “cliché movie moment,” when they came face-to-face, adding: “[I realised] this is it, this is the one.”

He then proposed by “mutual agreement,” saying: “It felt like the right thing to do.”

Looking awkward, Phil asked: “And, er, Jeff for you, what is it about her body, that does it for you?”

Gym-bunny Jeff explained: “Well, as you can see she’s quite a large lady. It’s hard to put your finger on, it’s just a certain desire… it floats your boat.

When asked about her weight gain, Rosie insisted: “I eat regular meals like everyone else. Then, at night, we have sensual feeding sessions.

“I am still regular with my eating habits.”

Phil then asked if it was responsible to be that size given that Rosie has a young son.

Rosie explained: “I live a healthy lifestyle. We go out, we go hiking, we go swimming.

“As long as you have a healthy balance… I’m not wanting to become 600 pounds and be bed-ridden.”

Viewers watching at home were stunned by the interview.

One wrote: “#thismorning #feeders what the actual hell? So Jeff likes his ladies the extra large size, she’s gained 12 stone to satisfy him?”

One more tweeted: “@thismorning #feeders The man doesn’t love the person. If they did they wouldn’t want the person to put their health at risk from severe obesity. A person’s veins get blocked with fat and it kills. Makes me feel sad.”

Others warned about the health issues Rosie could face, with one writing: “You get away with 28st because you’re young, give it 10 years and you can’t breathe and your knees give way. Your determination not to be bed ridden and 60st might come into question. #ThisMorning #feeders.”

Another added: “Fair play to men that prefer larger ladies but feeders is just not right… health issues #ThisMorning.”

A few seemed to quite like the idea, with one fan joking: “Feeders on @thismorning hmmm I’ll get paid to eat doughnuts and pizza instead of going to work.”

Another said they just couldn’t quite understand it, saying: “Each to their own but I really don’t get this feeder thing. Not judging just don’t get it.”

Read more: Cheryl hints at Liam not pulling his weight with Bear

What do you think of this relationship? Leave us a comment on our Facebook page @EntertainmentDailyFix and let us know what you think.