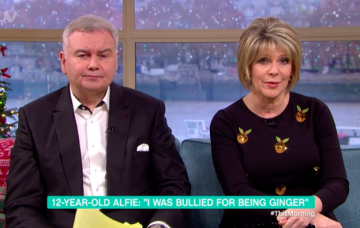 Viewers heartbroken over This Morning segment with bullied little boy

We all know kids can be cruel, but Monday’s episode of This Morning featured a particularly horrible story of online bullying.

Viewers were left emotional when presenters Ruth Langsford and Eamonn Holmes introduced cute little Alfie, 12, who was told to kill himself over his hair colour.

Alfie, who was on the sofa with his mum, Nyree Coleiro, confirmed it started about a month ago, when he started receiving messages on an anonymous app from awful bullies.

He explained: “They were saying, ‘I’d rather have cancer than be ginger’, and ‘I think you should kill yourself because of your hair colour’, and ‘I feel sorry for your mum for having you’.”

Ruth, 58, asked how he felt and he explained: “I was quite shocked about it, and quite upset, so I didn’t think to tell anyone straight away… I kept it to myself for quite a while.”

His mum added: “It was quite heartbreaking to be fair.”

Alfie wrote a poem about his experience, which has now gone viral.

He read out the rhyme, which begins: “Bullying ain’t nice, it isn’t cool. Just because I’m ginger, you’re so so cruel.”

Nyree admitted she cried when she heard the poem, as viewers watching at home piled in to compliment brave Alfie.

One tweeted: “I feel so sorry for this little boy being bullied.”

Another gushed: “Oh my gosh, I completely adore twelve year old Alfie! He is such a strong brave little man, and his ginger hair is stunningly gorgeous. Them bullies are just jealous because they’re not as handsome as he is, little gent!”

While a third complimented: “What an amazing kid Alfie is, people will bully about such stupid things!”

Another commented: “Little Alfie on @thismorning, what an inspiration! Now all the bullies look stupid! What a poem!! How can anyone pick on such a bright, intelligent lad?! Good on ya boy! #gingerarmy.”

Are you concerned that your child is being bullied? Emma Kenny is joining us to take your calls.

Call us on 08000 30 40 44 or email thismorning@itv.com – don't forget to leave your name and contact details. Phone lines open 9am Monday 17th December. pic.twitter.com/t4apIdSA86

The hosts later spoke to psychologist Emma Kenny, who joined the stars to speak to parents on the phone who are concerned about bullying.

We adore Alfie’s hair! And he’s clearly a very talented young writer – keep it up, Alfie!

What did you think of this segment? Leave us a comment on our Facebook page @EntertainmentDailyFix and let us know what you think.